The show STILL GOES ON! 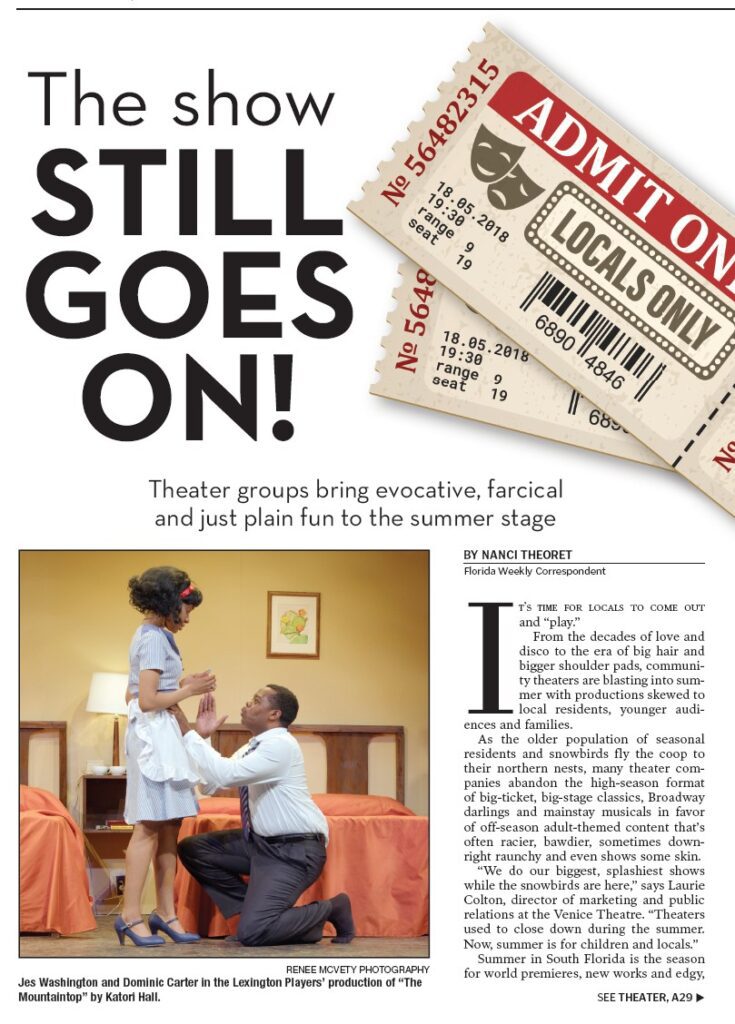 IT’S TIME FOR LOCALS TO COME OUT and “play.” From the decades of love and disco to the era of big hair and bigger shoulder pads, community theaters are blasting into summer with productions skewed to local residents, younger audiences and families.

As the older population of seasonal residents and snowbirds fly the coop to their northern nests, many theater companies abandon the high-season format of big-ticket, big-stage classics, Broadway darlings and mainstay musicals in favor of off-season adult-themed content that’s often racier, bawdier, sometimes downright raunchy and even shows some skin.

“We do our biggest, splashiest shows while the snowbirds are here,” says Laurie Colton, director of marketing and public relations at the Venice Theatre. “Theaters used to close down during the summer. Now, summer is for children and locals.”

Summer in South Florida is the season for world premieres, new works and edgy, evocative performances as well as parent approved musicals and just plain fun for theater. It’s our corner of Florida’s version of summer stock theater — with air conditioning. 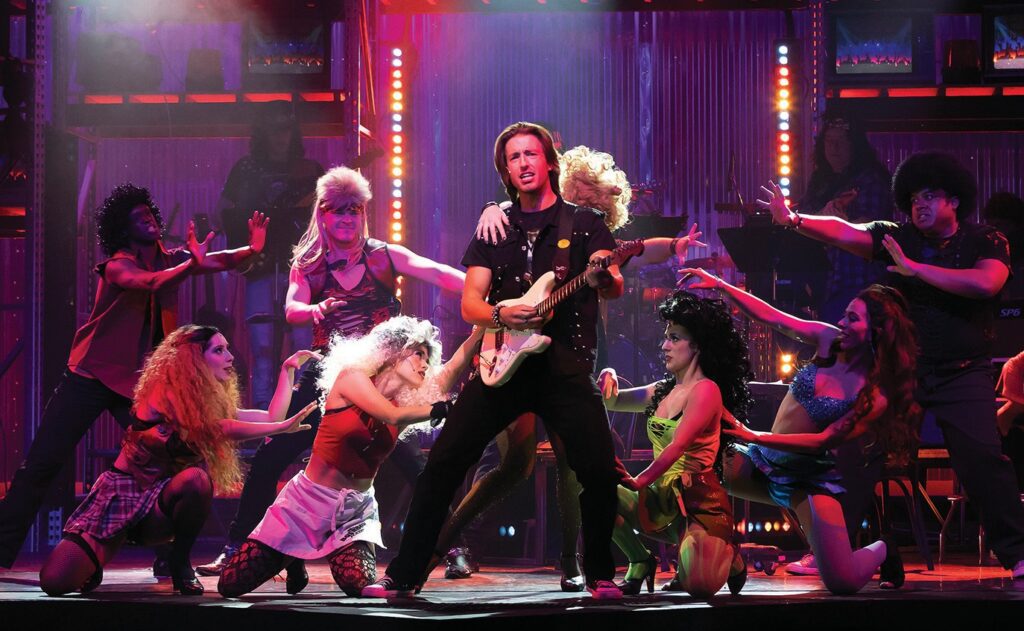 “The core of our seasonal residents and subscribers are here November through March and they like the older classic musicals,” says Melissa Vogt, general manager of Broadway Palm Dinner Theatre in Fort Myers. “This is the time of year we get to do fun things. We always offer a main family show during the summer, and it’s really worked well. Between visitors, local residents planning a staycation and grandparents looking for something to do with their grandchildren, it’s a good time of year to see a show.”

With its heavy metal rifts and power ballad anthems, “Rock of Ages” — laying through June 25 at the Broadway Palm in Fort Myers — is to the ’80s me-generation what “Oklahoma” and “My Fair Lady” are to Golden Age theater lovers. The five-time Tony Award-nominated musical follows the budding love story of a small-town girl and a city boy (yup, lyrics borrowed right from the Journey song) trying to save the ultimate rock bar, sans the cheesy movie montage. 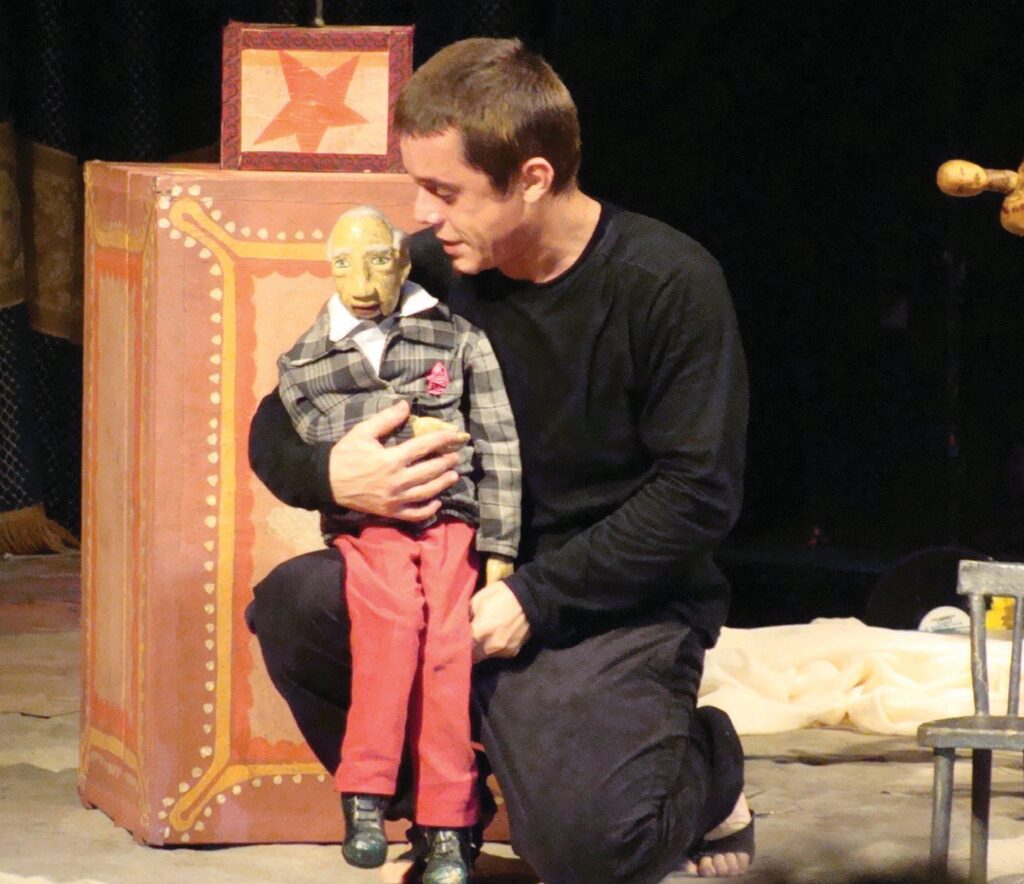 “We push the envelope in the summer,” says Kenzie Currie, programs administrator for The Naples Players. “We usually do a more modern show in summer, a big musical for our volunteers and locals. They choose the musical.”

As an encore to last summer’s smash “The Wedding Singer,” The Naples Players take on the farcical “Something Rotten!” set in the 1590s as playwright brothers, desperate for a comeuppance against the Renaissance rock star known as The Bard, quill-and-ink (pen) the world’s first musical. Performances are June 22 to July 24.

From lovingly mocking and satirical, this year’s off-season productions also dive deep into racism and societal issues. The Laboratory Theater of Florida offers the Aug. 5-20 Southwest Florida premiere of the 2019 Pulitzer Prize-winning “Fairview,” which the New York Times called “a play about race, though not about race… Fairview (will) have you squirming in your seat. You will also wind up questioning your basic right to sit there.”

Theatre Conspiracy, also in Fort Myers, presents “The Chechens,” hailed as an intense yet funny play. Written in 2019 and onstage Aug. 5-15, it’s uncanny art-imitating-life reality takes audiences to modern-day Grozny, the capital city of the Russian Chechen Republic roiling amid rumors of a Russian roundup of “certain people” and detainment camps.

The Lab Theater takes a parodical jab at a Hitchcock horror classic during the world premiere of “The Birds” through June 30, and offers the July 15-16 limited engagement “Trap,” a documentary style thriller researching the strange occurrences that have befallen the cast of a middle school play.

In partnership with the American Association of Community Theatre, Venice hosts its fourth aactWORLDFEST, a weeklong community theater experience celebrating shows from across the globe performed June 20-26 by troupes from 10 countries. Highlights include the fourth appearance by Rome’s Maner Manush Troupe, presenting “The Fabulous Journey” in the commedia dell’arte style; award-wining Brazilian puppeteer and musician Caio Stolai; “The Curious Incident of the Dog in the Nighttime” by the Yerevan State Puppet Theatre from Armenia; and “Passion” performed by Switzerland’s Theatre Studio BELOE.

“Our actors stay in people’s homes, and some perform in their own language,” Ms. Colton says. “The acting is really physical so it’s easy to follow along. It’s the most exciting international festival.”

Many theaters also offer summertime family friendly productions and give local children their moment in the spotlight. Teen actors can join The Naples Players “Something Rotten!” Teen Bootcamp June 6-July 1, on Mondays, Wednesdays and Fridays. Whether you’re a teen cast in “Something Rotten Teen” and itching to dive into the material or a young actor ready to build skills in acting, singing, and dancing, this class is for you. Performances for Something Rotten Teen are Aug 5 –7. Younger kids take the stage during July 1-3 performances of “Dear Edwina Jr.,” the story of a little girl with an advice column, and bigger roles and choreography with appearances by the Cat in the Hat, Horton the Elephant and Gertrude McFuzz during “Seussical Jr.” July 29-31.

For kids and families, the Broadway Palm offers “The Emperor’s New Clothes” through June 24 and “The Wizard of Oz” July 1 to Aug. 13.

The theater’s annual SummerStock for high school and college performers features “The Fantasticks,” the longest running musical in the world. It’s a timeless tale of young love and parents who try to keep them apart. Shows run July 19-24.