Sussman and the Sandman

How a photographer forged a fairytale partnership with a unique bookstore 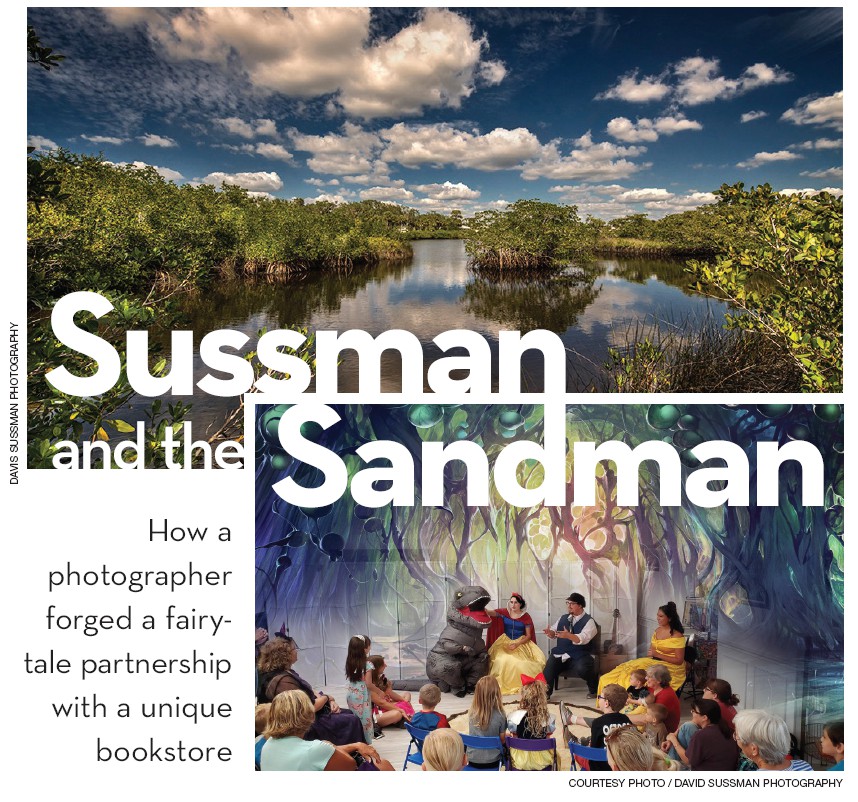 Once upon a time, there was a talented photographer. He had accomplished quite a lot during his career, and he had gained an international reputation. But there was one thing he wanted that he didn’t have — his own gallery.

In the same village, there was a couple who owned a bookstore. They had wanted to add an art gallery inside their establishment, but they could never find the right artist. Then one day, the photographer and the couple met. The photographer became enchanted by the couple’s artistic ability, especially the monthly program they offered of reading stories to children while in character dress. They, in turn, were impressed by the photographer’s work.

And — poof! — the couple magically invited the photographer to open a gallery inside their bookstore.

Well, it wasn’t really magic. But the collaboration between Sandman Book Company owners Scott Hill and Heidi Lange and photographer David Sussman has been magical.

For Mr. Sussman, the experience is akin to a fairy tale. 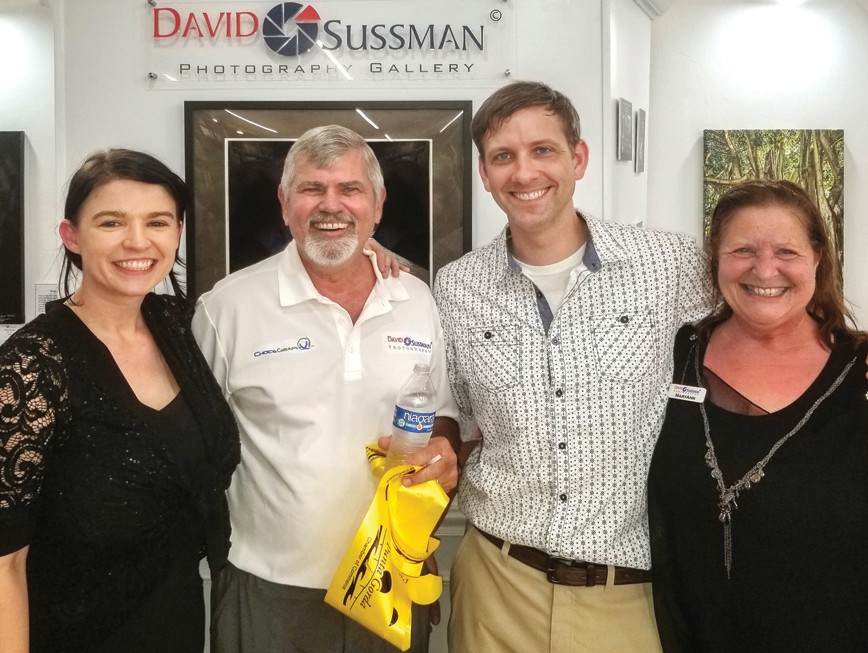 Understand — Mr. Sussman is not the kind of photographer you hire for portraits or weddings. His résumé is stunning: He started at a stealth lab that provided conceptual warfare-related work for the U.S. Navy, where he learned how to capture images no one else knew how to shoot. He used pioneering technology that rivaled what George Lucas was using to film “Star Wars.” He’s made the covers of numerous industry trade journals and magazines. And he’s earned numerous awards — including one honor (when he was being sponsored by Kodak) at Disney World’s EPCOT, which quickly won him an international reputation.

One would think it would take a lot to impress Mr. Sussman. But when he stopped by one day at Sandman Book Company, he was indeed impressed.

“This began years ago,” Mr. Sussman explained. “We were running around shooting pictures the way we usually do. They were on Burnt Store Road back then in a plaza pretty much all to themselves.” 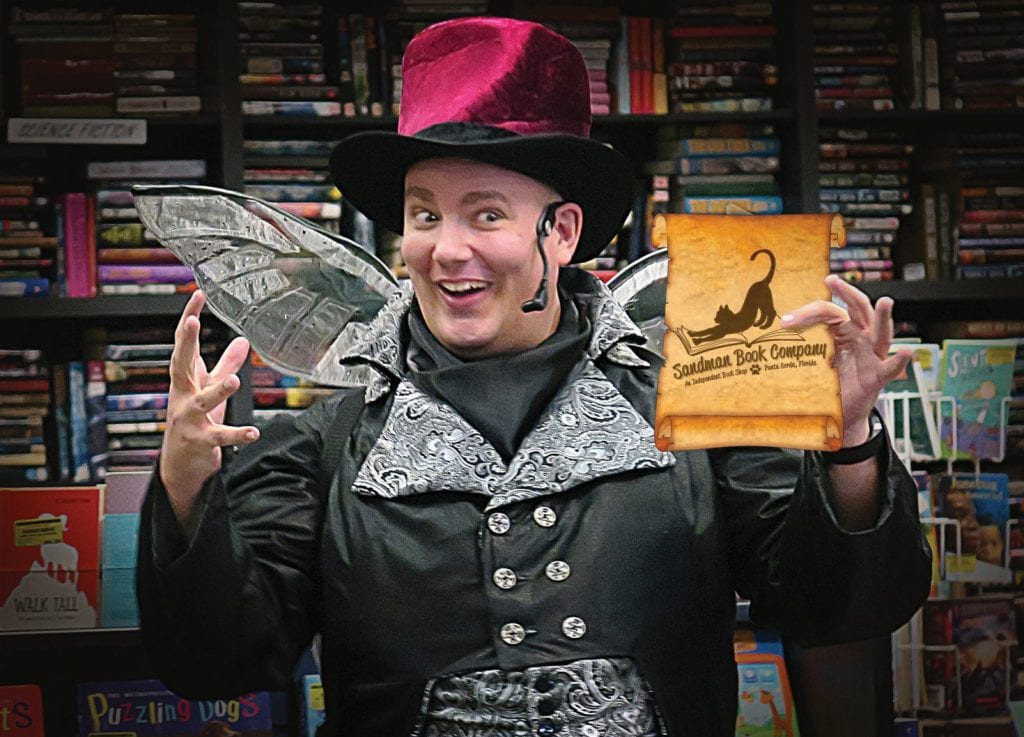 What stood out to Mr. Sussman and his wife, Mary Ann Tipton, were two things. First: Mr. Hill has a talent for building unique architectural flourishes using books — not as in reading them to find out how to do it, but using books themselves. An article about his “Book Bridge,” an archway (constructed of books that had been earmarked for recycling) inside the bookstore, went viral online, garnering attention nationally.

“We stopped in and — oh, my God — it was just crazy construction with books,” Mr. Sussman recounted. “They had book arches and all this stuff. We started talking to the owner, Heidi.”

That’s when he learned about what really caught his attention — the bookstore’s signature Sandman Storytime.

“I’m looking at these Storytime costumes that she makes herself,” Mr. Sussman said. “We just got fascinated and said, ‘Why don’t we come down and do something creative with this.’ I thought about bringing in studio lights and lighting it up with colors. Well, Heidi went nuts over these pictures. I loved them, too. I believe one or two won awards. That just kept building and building.” 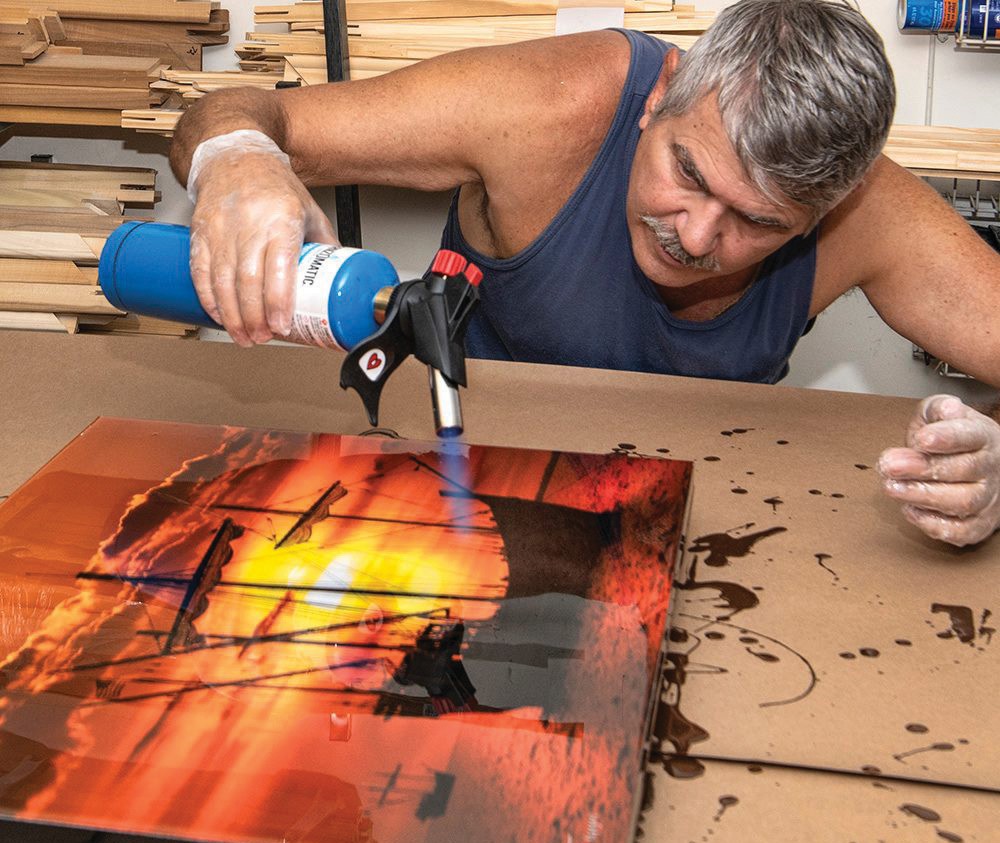 Sandman Book Company started online 13 years ago and opened its original store on Burnt Store Road, where it existed for a decade. Perhaps “existed” is the wrong word. Let’s say “thrived” — becoming, Ms. Lange stated, the largest independent bookstore in Southwest Florida. (It might also be the largest in South Florida, but there’s a store in Miami that won’t divulge the number of books it has, so it’s anybody’s guess.)

How large is “large?” In June, the couple began moving their collection of nearly 160,000 books and 500 bookshelves (even more would be built as needed) into Sandman’s new home on Duncan Road in Punta Gorda. 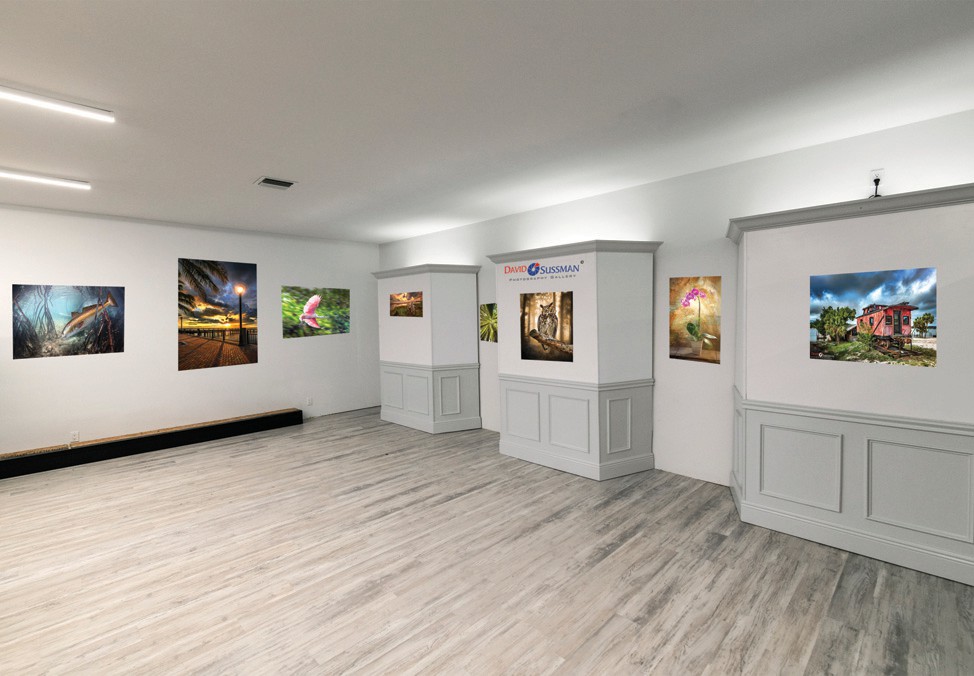 “I hate to sound like that Kia guy,” Ms. Tipton quipped, “but their bookstore is huuuuuuge.”

Ms. Lange noted that they had had their eyes on the new location for a while, but it had only recently become available.

“And the timing was right because they’re about to start construction on Burnt Store Road fairly soon, which would make it difficult for customers to get to our old location,” she said.

It’s only slightly larger than the old venue, she added, but they have more control over the layout of the new building, which gives them more flexibility on how they want to set it up.

From the get-go, Sandman was envisioned as a unique kind of bookstore, one that defied convention.

“We felt the old way of doing things was maybe not the best way anymore,” Ms. Lange said. “So we do things differently than traditional bookstores do. Our prices are lower. We do our trade-ins differently. That’s kind of helped us to make it where we were able to succeed where that was difficult for some people.” 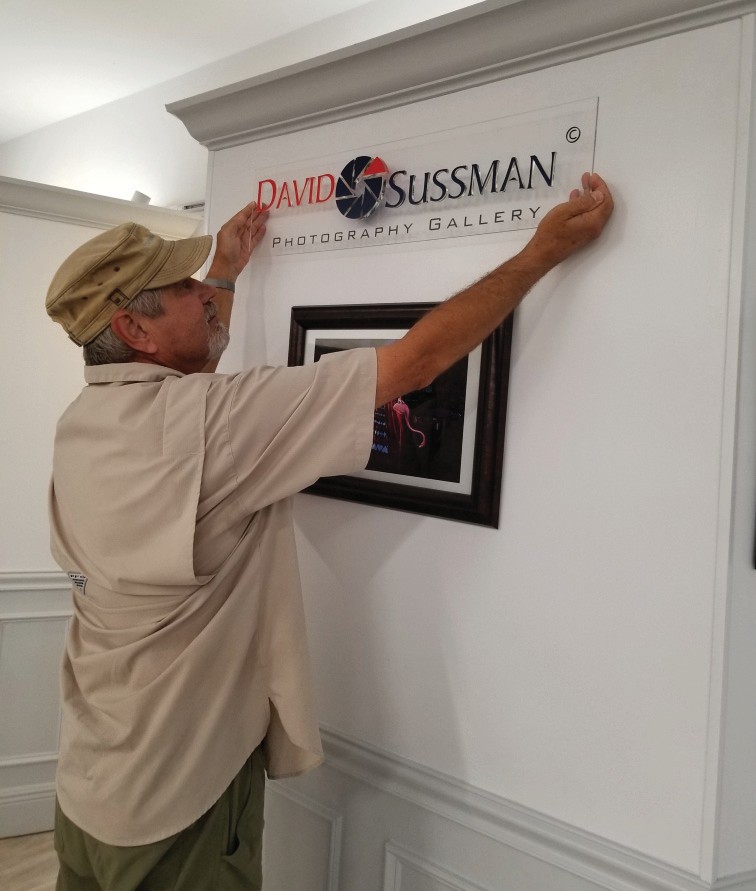 Left: David Sussman hangs up his shingle, making it official.

As Mr. Sussman discovered, one of the store’s trademarks is Sandman Storytime, which takes place at 10:30 a.m. on the first Saturday of every month. It has become one of those events that attract and engage adults as well as children.

“Storytime is pretty awesome,” Ms. Lange said. “The way it started was that, two years ago for Halloween, we thought it would be fun to have some of the staff dress up. The kids went crazy for it. We felt we needed to keep doing this because it was really popular. It was fun for us, too.”

The Storytime experience got kicked up a notch when the couple met their “Story Teller” —Doug Coventry, a children’s theater teacher in Fort Myers. 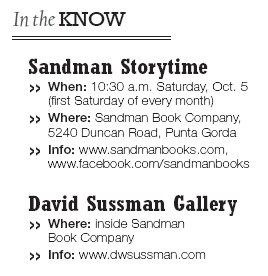 “He actually has a whole children’s theater company that he runs down there,” Ms. Lange said. “He comes up here once a month. He’s just phenomenal. The energy he brings to Storytime — we just couldn’t do without him.”

Initial worries about not having enough people to dress up as characters were proven to be unfounded. Now, there is a wait list, and participants have to be scheduled so that everyone has a chance to participate.

“We have a really good group of volunteers to make the costumes and dress up and do the characters and show very early in the morning on Saturday,” Ms. Lange said. “Last time, two of the girls got here at 6:30 a.m. to start doing the hair and makeup for the different princesses.”

Mr. Sussman’s interest in Sandman Storytime turned out to be serendipitous.

“We actually wanted to have a gallery as far back as 2013, which was before I met David,” Ms. Lange said. “We had a spot in our previous location, but I never got the right artist.”

Mr. Sussman views the venture as a collaboration with other artists who are not working in his medium, as well as an opportunity to present more diverse media in one centralized location.

“Stretch canvas has been one of my signature ways of displaying art, but now I’m going to have giclée mounted artwork,” he said. “I have an interactive display with more than 2,000 images you can scroll through.”

There’s also a large TV to showcase videos and custom work for both Mr. Sussman and Sandman Book Company.

Mr. Sussman’s proclivity for giving back to the community is also in play here. He wants to offer Photo Talks — informal gatherings where people interested in photography (from curious shutterbug to seasoned pro) can join an informal, interactive discussion and learn techniques for improving images (even when using no more than the camera on a smartphone) — at no charge to attendees.

“One of the things I recently looked at is that, back in the ’70s, you had to be a polished professional to come up with a decent image,” he said. “Nowadays, there’s something like 1.2 billion images being posted on social media. I would think there would be plenty of people who would want to improve a simple snapshot. We can get together, have fun, talk.”

Fun seems to be the key element in the partnership between Mr. Sussman and Sandman. Only a wizard would venture a guess as to what the future holds for both parties.

Perhaps it’s too early to say, “And they worked together happily ever after” — but they’re certainly off to a magical start.

“I was really happy when we were working with David on some other stuff a couple of years ago,” Ms. Lange said. “It’s working out. I’m happy to have David be our gallery artist.” ¦