What nonprofits can do during tougher economic times 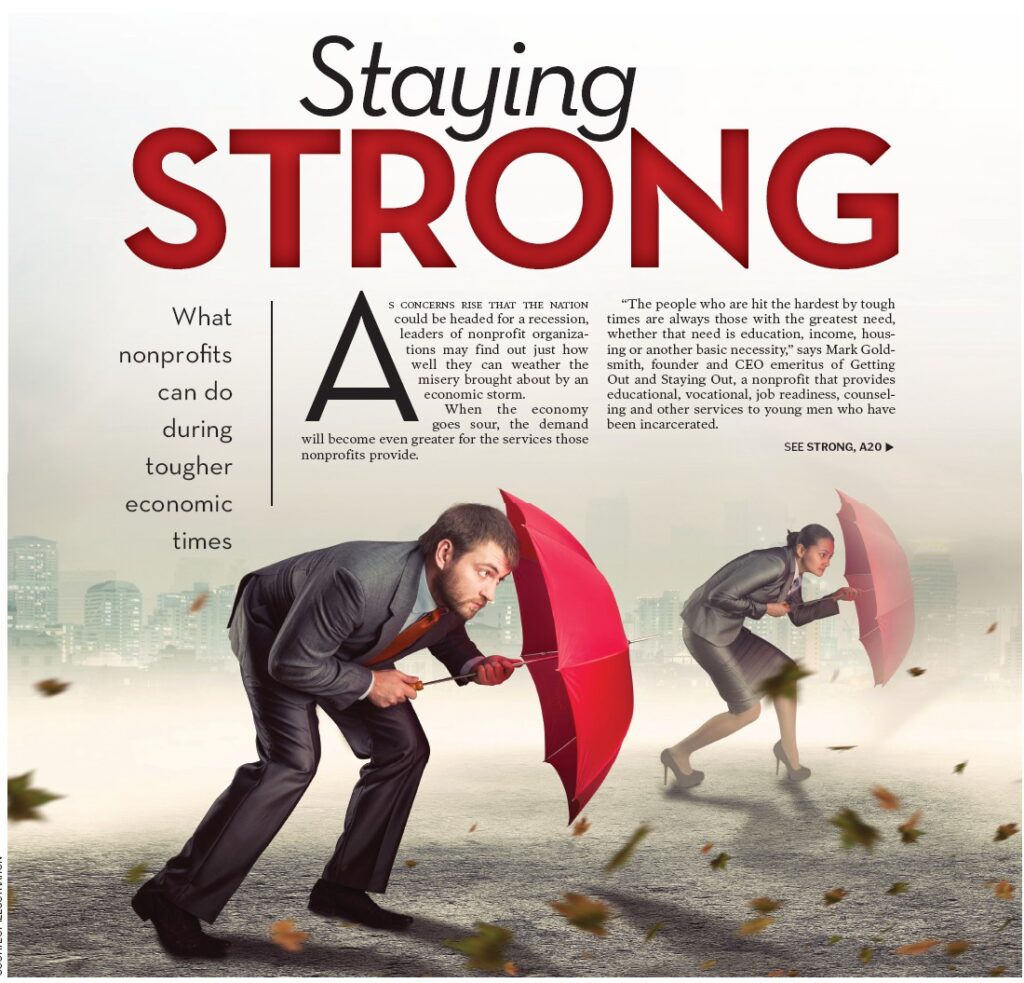 AS CONCERNS RISE THAT THE NATION could be headed for a recession, leaders of nonprofit organizations may find out just how well they can weather the misery brought about by an economic storm.

When the economy goes sour, the demand will become even greater for the services those nonprofits provide.

“The people who are hit the hardest by tough times are always those with the greatest need, whether that need is education, income, housing or another basic necessity,” says Mark Goldsmith, founder and CEO emeritus of Getting Out and Staying Out, a nonprofit that provides educational, vocational, job readiness, counseling and other services to young men who have been incarcerated.

Mr. Goldsmith, who relates how he launched GOSO in the book “From Madison Avenue to Rikers Island,” says his nonprofit had been in existence just a few years at the time of the last major recession in 2008.

“I think if I was a new agency starting out right now, I would be concerned,” Mr. Goldsmith says. “Fortunately, every report seems to indicate there will not be a serious recession. It is going to be minor, which is good.”

Still, wading through tough economic times can be grueling for any organization that’s mission is to help others. Mr. Goldsmith offers a few tips for nonprofit leaders preparing for adverse times:

¦ Focus on your strengths. Put an emphasis on what you do that’s effective, Mr. Goldsmith says. “Why are you getting funded? The answer is because you produce results,” he says. Mr. Goldsmith, who previously worked in marketing for major cosmetics firms, brought his corporate skills to the realm of nonprofits. When speaking with potential donors, he would discuss a nonprofit version of return on investment, asking them what they wanted their donations to achieve. Then he would explain how GOSO could accomplish that. “The results are something any nonprofit should put in front of potential funders, especially in a recession,” he says. “Make it clear that these services are vital.”

¦ Avoid launching anything new. While it can be exciting and worthwhile to venture into new programs, and there is almost no end to services clients might need, a declining economy is not the time for a nonprofit to experiment with what it offers, Mr. Goldsmith says. Stick with what you do best, he says, and hold tightly to the mission statement that has served you well.

¦ Intensify volunteer recruitment efforts. While new programs are best avoided, new methods could be employed to attract volunteers, who are needed more than ever when demands on your services increase. “You are trying to reach out to people you have not reached before,” Mr. Goldsmith says. “Volunteering is something that could almost be enhanced in tough times because you have another story to tell. You have your regular story of why you are out there. But you also can focus on the fact that things are made exceedingly worse by the recession.” Such an appeal could resonate with someone who has not volunteered before, but now sees that their help is needed more than ever, he says.

¦ Consider partnering with another organization — but with caveats. Partnering with another nonprofit so you can share resources could be beneficial, but there are pitfalls, Mr. Goldsmith says. “One major problem is the mission statements might not work together, so you have to be aligned with that other agency,” he says. An organization’s reputation is also critical, so be careful about becoming involved with an agency that could damage your group’s good name. Work ethic, culture and staff qualifications also are key. As an example, Mr. Goldsmith says GOSO hires only licensed social workers with a master’s degree. Another organization’s standards might not mesh with that. “Of course, there is something called survival,” Mr. Goldsmith says. “Hooking up with another agency might be a necessity just to survive, and if that’s the case, then so be it.”

Regardless of the state of the economy, there are always those in need of assistance, Mr. Goldsmith says, and providing that assistance is more rewarding than many people realize.

“There’s no way to describe the joy of seeing your best efforts working,” he says. “In terrible times, you are able to do these great things.”

Mark Goldsmith, author of “From Madison Avenue to Rikers Island: The Making of a Social Entrepreneur,” is founder and CEO emeritus of Getting Out and Staying Out, a nonprofit that provides educational, vocational, job readiness, counseling and other services to young men who have been incarcerated. Prior to his nonprofit work, Mr. Goldsmith was an executive in the cosmetics industry for more than 35 years, rising through the ranks at companies like Revlon, Yves St. Laurent and Almay before starting his own company, Inventory Management Systems, specializing in trading excess inventories of well-known brand names for media time at similar values. ¦