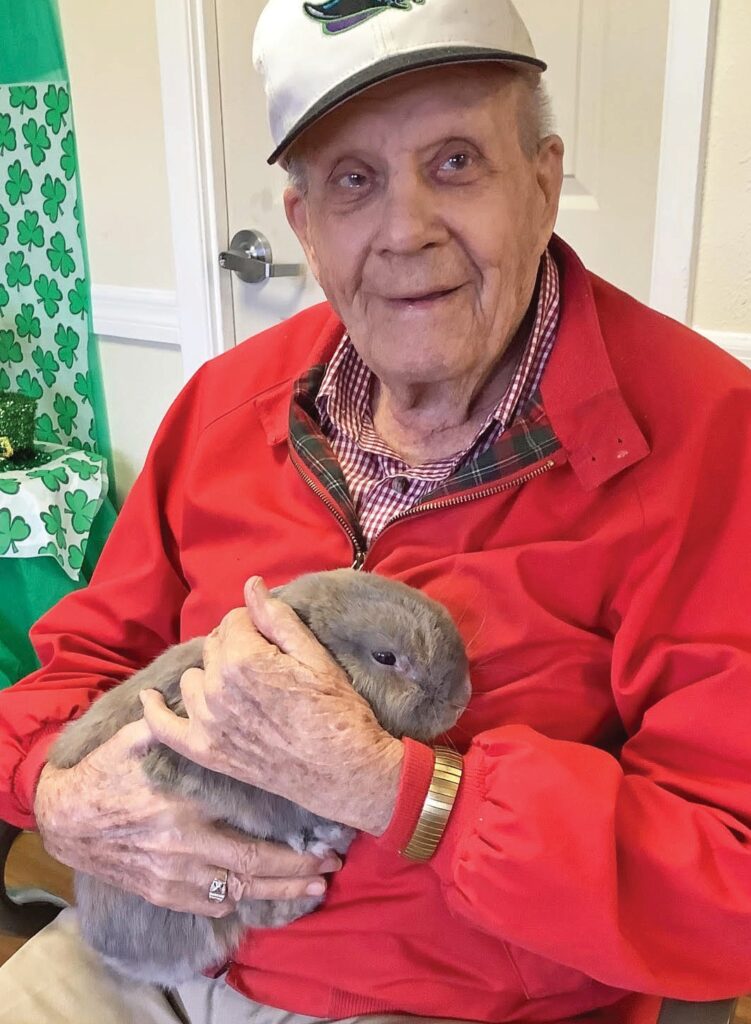 It all came about by happenstance.

In 2018, the chief operating officer of the Grand Villa Senior Living Community in Pinellas Park happened to visit his mother-in-law, who was in the memory care unit. He brought along his daughter and her new pet bunny. The bunny stole the show. Other residents crowded around wanting to see and touch the animal.

An idea was born. Bunnies became the therapy animal of choice at all 18 Grand Villa Senior Living locations. There are three locations in Palm Beach County. “I’m the bunny trainer,” said Max Piasecki, who is also the leasing coordinator. He has since transferred to the Clearwater Grand Villa location, but is still in charge of bunnies.

The bunnies interact with residents four or more times per week. “We call it pet therapy,” Mr. Piasecki said. “They can hold them, pet them, love on them.”

The bunnies can also run around loose for a bit for a little exercise.

There are two per community, which means there is a bevy of bunnies — about 40 in the program.

The bunnies, mini Holland lop bunnies, come from a bunny breeder. As the name suggests, they have floppy ears. “They get a very good organic diet. Nice hay,” Mr. Piasecki said.

The bunny program really is something different for the communities, he said. The residents love it. “They love to pet the bunny. They relax. It’s also relaxing for the bunny. It makes them (residents) feel like they have something to do, something to nurture, look after. A lot of them raised children. They can still feel like they have responsibility. It’s amazing that such a small animal can have such a huge impact.”

Some of the residents may have had a pet for a long time and can no longer take care of animals, he said. Residents at Grand Villa communities are allowed to bring their dog or cat, but they must be able to take care of it. Or the family decides the new resident should no longer have the pet. “It gives the resident an opportunity to still have an animal to hold and love,” Mr. Piasecki said.

When he was still handling activities at the Pinellas facility and a resident with dementia got upset, he would give the bunny to the person and say, “Hey, I need to clean the bunny cage,” and ask the resident to sit in a chair holding the bunny. After holding and petting the bunny, the resident’s agitation and worry would subside, he said.

One poignant anecdote: A resident at another community really hadn’t talked much at all for a long time, Mr. Piasecki said. “When she saw the bunny, petted the bunny, she started telling stories about how she had grown up on a farm and raised bunnies.”

What does it feel like to be the bunny whisperer?

“When we started out in the company doing it, I really enjoyed it,” Mr. Piasecki said. “I didn’t plan on that happening. They asked me, would I be OK helping baby bunnies?” He was OK. He still is.

Now there’s talk of possibly getting a miniature horse. ¦