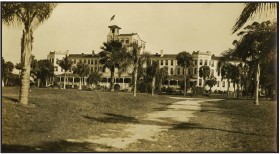 This undated post card shows the Hotel Charlotte Harbor, opened in 1887 as the Hotel Punta Gorda.

Punta Gorda has never seen anything like it before or since. On a night 55 years ago this week, the most famous hotel in the county’s history burned to the ground, leaving little more than a smoldering heap of rubble and ashes.

It was gone. Utterly. And forever.

Flames were visible more than 25 miles away as the building that was constructed in 1887 and opened as the Hotel Punta Gorda was consumed on Aug. 14, 1959. Firefighters rushed in from three counties, from Arcadia and Fort Myers and Fort Myers Beach. Onlookers feared the fire would spread to the rest of downtown. Firefighters struggled for five hours to keep flames away from other buildings. 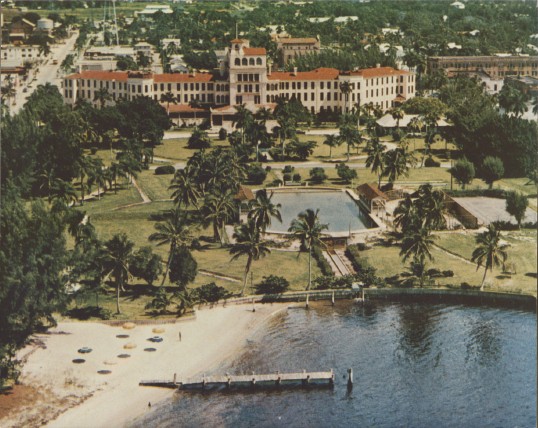 All that may have saved Punta Gorda from further destruction that humid night was a fortuitous change in wind direction. 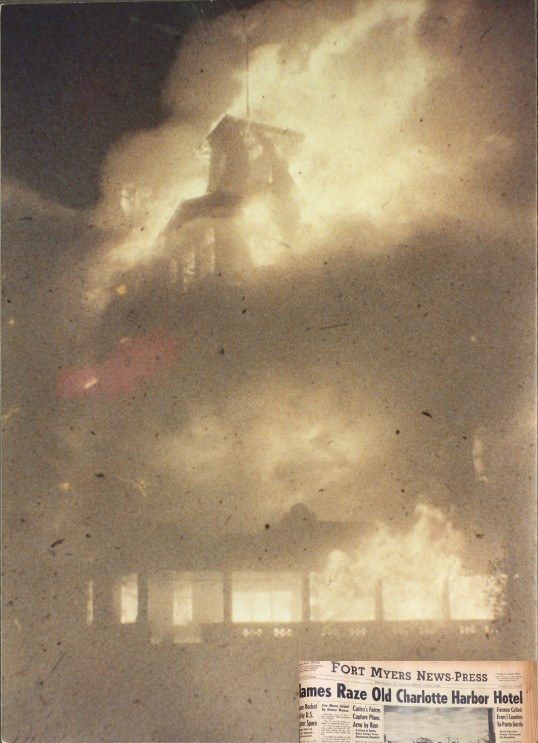 The cupola atop the ballroom is pictured here amid the flames that destroyed the 150-room Hotel Punta Gorda resort hotel on August 14, 1959.

Sherra Poppell was there, witnessing it from a safe distance as a 6-year-old, then beginning her first week of grade school.

“They thought it was going to take the whole town,” Ms. Poppell said.

It was quite a sight for a small child.

“I was kind of scared,” Ms. Poppell said. “I didn’t know what was going to happen.” 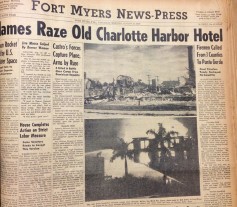 The fire was a huge regional news story, one the Fort Myers News-Press splashed across its front page the next morning.

Betty Jo Lees was living across the Peace River 55 years ago.

“Somebody said the old hotel was on fire,” said Ms. Lees, a 1955 graduate of Charlotte High.

The fire was a huge regional news story, one the Fort Myers News-Press splashed across its front page the next morning with a big photograph and this headline: “Flames Raze Old Charlotte Harbor Hotel.” 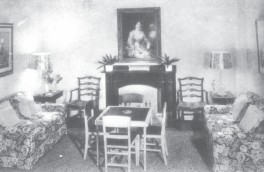 This photo taken of the interior of the Hotel Charlotte Harbor shows a private seating area with sofas, a card table and a fireplace.

The paper reported that the “giant structure” was totally destroyed and that there were “no casualties.”

Reporter Rufe Daughtrey wrote that Homer Monson, who had just arrived in port with a cargo of fish at the Punta Gorda Fish Company, first noticed the fire at 2 a.m., and jumped in a car and sped to a fire station to spread the alarm.

He notified engineer Derril E. Moore, who was on duty at that time. It was a scary night as the hotel, which was made of native pitch pine, blazed away in the summer heat.

Firefighter Earl Davis told a reporter that, “the heat was intense and we had to keep the firemen sprinkled so they could stay close enough to keep water pouring into the building.”

The heat wasn’t the only worry.

“We kept water pouring steadily on a 400-gallon tank of fuel oil to prevent an explosion,” Mr. Davis told the newspaper.

That prevented an explosion but couldn’t save the grand old hotel.

“A blackened chimney towered bleakly out of the wreckage of the kitchen,” Mr. Daughtrey wrote. “Steel columns for the elevator were doubled by the heat into hairpin shapes.”

The cause of the fire was immediately a mystery and remains so. Hotel caretaker Floyd Goodpaster was suspected of being involved in starting the fire and was given a lie detector test and was subject to what The News-Press termed “three days of grilling.”

They couldn’t pin anything on the 48-year-old Mr. Goodpaster about the fire and three days later came the news that he was cleared of any suspicion of starting the fire.

That’s how the grand hotel’s life ended — under plumes of smoke and an unresolved investigation.

By 1959, of course, people were traveling by jet planes and driving over the Peace River in cars and watching television and listening to radios.

None of those things existed when the hotel opened in 1887.

The fire destroyed it 72 years after it opened at what was then the southern terminus of railroad service on Florida’s west coast, which was provided by the Florida Southern Railway.

The hotel was built by Henry Plant, a towering figure in Florida history. He built other grand hotels on Florida’s west coast much like his east coast counterpart, Henry Flagler, built on the other side of the state.

In the early 20th century, though, the hotel wasn’t always considered an historic treasure.

In historian Vernon Peeples’ “Punta Gorda and the Charlotte Harbor Area, A Pictorial History,” this comes through in a quote from more than a century ago.

Mr. Peeples reported that the Punta Gorda Herald said this in 1910: “The big unsightly building known as the Hotel Punta Gorda continues to be an eyesore and an incubus to the town and there seems no prospect that it will ever be anything else. … The huge old hulk standing idle and ugly for nine years past is actually a curse to the community.”

But the building survived despite hard times. Mr. Peeples wrote that there were some years back then when the hotel didn’t even open.

Over its 72 years of life, the hotel was known by various names. Barron Collier, whose name is perhaps best known for Collier County and the Collier Inn on Useppa, bought the building in 1924, which had closed in 1914, and renamed it the Hotel Charlotte Harbor.

It was renovated and modernized, a swimming pool was built and the hotel reopened in 1927. Two clay tennis courts were constructed in 1930 for one of the iconic athletes of the first half of the 20th century — tennis player Bill Tilden.

Tilden, who was as famous as Babe Ruth, Jack Dempsey and Red Grange in the 1920s, won a tournament in Punta Gorda in 1931.

Mr. Collier died in 1939, and his heirs sold the hotel to G. Floyd Alford in 1944 and he, in turn, let Martin Fleischman take over the mortgage in 1956. Mr. Fleischman re-named it the Charlotte Harbor Spa, which remained its name until its fiery death.

Yet, in towns across the peninsula, similar hotels were built. There were the Alcazar and Ponce de Leon in St. Augustine. There was the Belleview Biltmore Resort & Spa in Belleair, a short drive north of St. Petersburg.

There was the Palm Beach Inn, which was later re-named the Breakers.

And more — the Fort Myers Hotel, the Kissimmee Hotel and the Ocala House and the Tampa Bay Hotel.

The Tampa Bay Hotel, which is now the site of the University of Tampa, opened in 1891, four years after the Hotel Punta Gorda.

The fate of Punta Gorda’s famed hotel was not unique in the state’s history.

Other grand old Florida hotels from the 19th century were also destroyed by fire. The Hotel Continental in Atlantic Beach, the Seminole Hotel in Winter Park. The Kissimmee Hotel and two in Jacksonville — the Windsor Hotel and the St. James Hotel — all were lost to fire.

Now, 55 years later, the images of Aug. 14, 1958, are still seared in the memories of those who were in Punta Gorda that night.

“I’ve never seen a fire like that,” Ms. Poppell said.

Neither has anybody else in Charlotte County history.

The hotel, though, lives on in 2014 in a mural in downtown Punta Gorda on the side of the Charlevoi Condominiums.

The mural, like the hotel it re-creates, is another symbol of Punta Gorda’s pluck. The original hotel mural was destroyed by Hurricane Charley on Aug. 13, 2004, one day short of the 45th anniversary of the fire that destroyed the hotel.

The middle of August has not always been kind to Punta Gorda, sending first fire and then a hurricane.

But the town recovered from both August catastrophes.

An historical marker about the Hotel Punta Gorda was placed in 2009 on the site of the old hotel on West Marion Avenue near Taylor Street.

Photos of the hotel can be found on the Charlotte County Historical Society website.

Most of the people who witnessed the fire are gone, as gone as the hotel itself.

But for anybody who wonders about the grand old place, just walk or drive by the Charlevoi Condominiums and look up, up at a Florida landmark, one destroyed 55 years ago this week. ¦