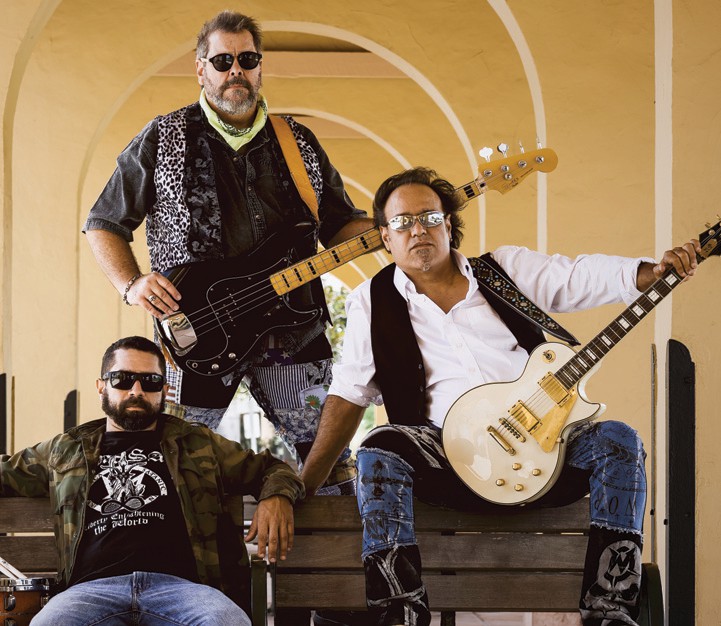 Halloween is a time for the dead to rise. And so it is with Jukebox Assassins, an area band that formed and died out last year while still in its youth.

But, like Dr. Frankenstein, founder and front man Rob Garcia has stitched together a newer, better version of the band.

The highly experienced musicians — Norris “The Naz” Smith on bass, and Peter John Colon II on drums, who join guitarist Mr. Garcia (all three perform lead and background vocals) — have been “woodshedding” it, practicing their brains out in relative obscurity. Now, they are scheduled to emerge from the darkness of their hidden rehearsals to play their first gig on Saturday, Oct. 31, at SandBar Tiki & Grille in Englewood.

“Halloween seemed perfect,” Mr. Garcia said. “What better date for a rock band to come out in 2020? Since Florida opened itself up, I said, ‘Why don’t we play a couple of select venues to see what it sounds like in front of an audience, instead of in a box?” 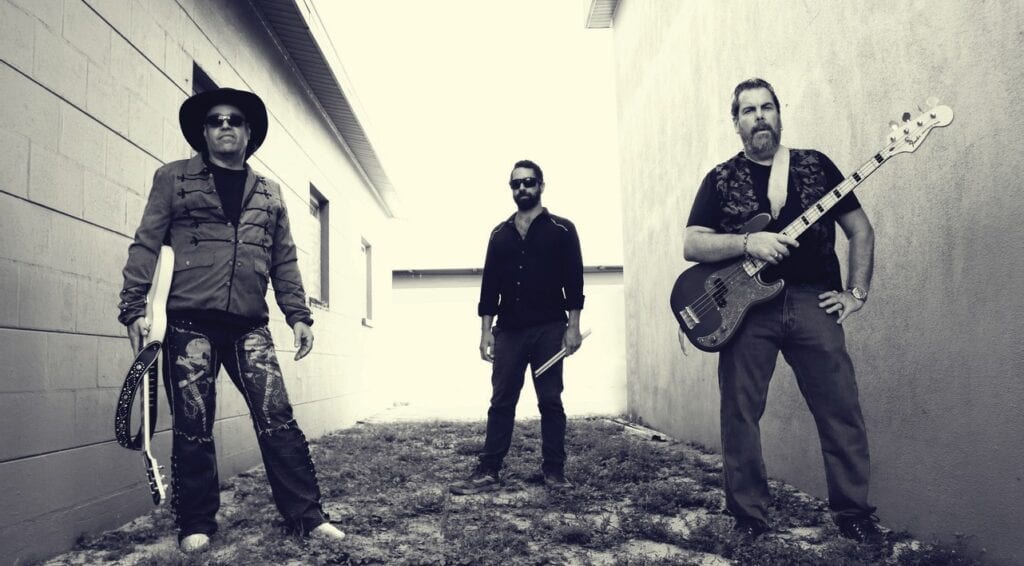 It’s only the start of what Mr. Garcia believes will be a monster future for the band.

The original Jukebox Assassins (Mr. Garcia refers to it as version 1.0), “started growing tentacles and started going in different directions.”

Mr. Garcia wasn’t able to give it his full attention, as he was already stretched thin with his involvement in the Woodstock-era “Peace and Love Tour,” which traveled to numerous states.

Eventually, Mr. Garcia hopes for Jukebox Assassins (version 2.0) to be a tour band as well.

“We want to live on a bus and play theaters,” he said, “and we think we have a good shot at that.”

He certainly seems to have amassed the talent to do that.

Mr. Smith has been a staple in the Tampa/ Clearwater music scene for decades, and launched a theatrical production company, Rock City Events. He crossed paths with Mr. Garcia through a classified ad for Jukebox Assassins.

“After having interviewed what seemed to be every bass player in the Tampa Bay area — and disqualifying every single one for a plethora of reasons that ranged from limited desire to play on a regular basis, to adversity to travel and more — Naz came in, saw the vision and has been 110% ‘in’ since day one,” Mr. Garcia said. “With that kind of energy, a bass playing style influenced by rock’s most iconic players, and the ability to share in lead vocal duties as well as supporting in harmony vocals, he becomes the trifecta ‘unicorn’ every band wishes they had but, more often than not, falls short.” 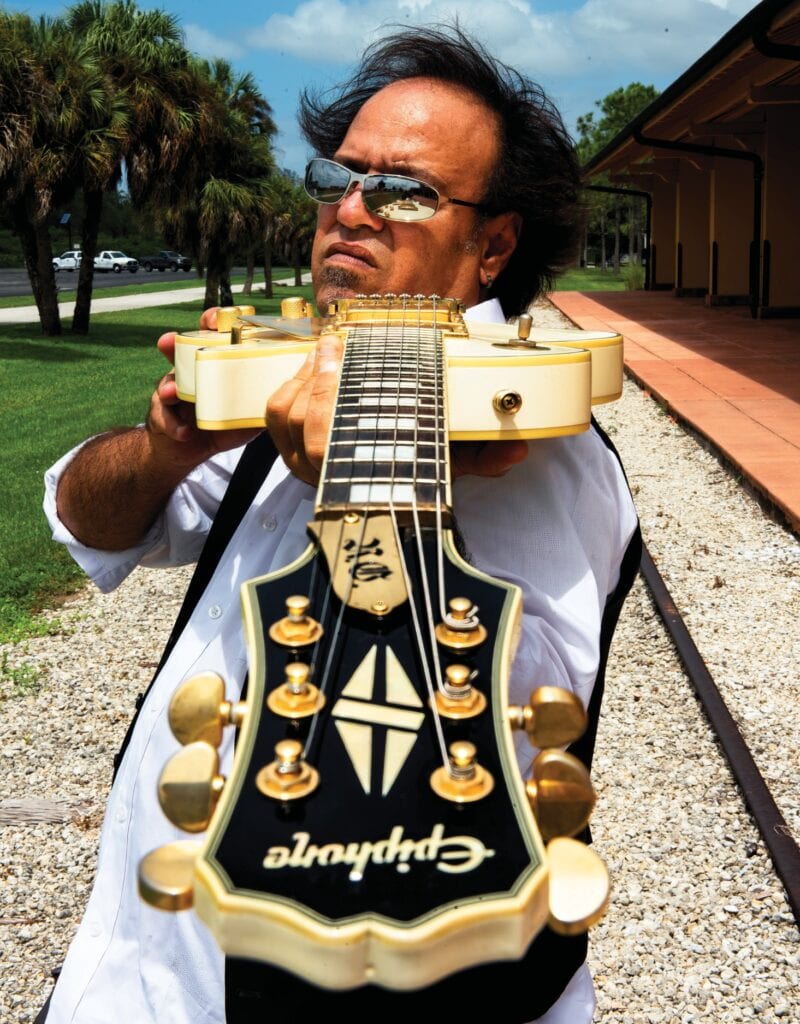 He classifies Mr. Colon as “simply one of the best drummers I’ve ever heard or performed with.”

The most formally educated member of the band, Mr. Colon graduated from Boston’s prestigious Berklee College of Music.

“Peter drives the band with power, while constantly ‘cutting’ the time and meter in order to keep the music interesting,” Mr. Garcia said. “Most drummers — and bands for that matter — would be grateful to have a percussionist who could do only that, with the finesse and discipline that Peter demonstrates. That, however, is not where his contribution ends. Peter not only creates the third harmony background vocal in all of our music, but also takes lead vocal duties in many of the songs.” 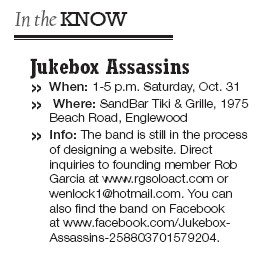 The idea for Jukebox Assassins emerged as an extension of Mr. Garcia’s solo act, “Rock ’n’ Roll Love Letter.” The concept of that show has been to cover highlights of the 70-year progression of rock ’n’ roll from 1945 to today. But don’t expect the Assassins’ versions to sound like the originals.

The band is also in the process of adding a computerized multimedia component.

“We’re playing the music on stage live, but behind us is a giant screen showing period-correct news articles of what was happening by the decade,” Mr. Garcia said. “We’re going to pay homage to a genre that changed really everything — the way we talked, the way we dressed, the way our hair got cut.”

“I’ve had a relationship with the people who owned SandBar,” Mr. Garcia said. “They might’ve been the first people who booked me when I first came from New York to Florida. When I told them about the band, they had given 1.0 a shot, and it worked out really good, actually — very positive reviews. They had no idea that version 2.0 was even a thing. When I mentioned it, they gave us three dates.”

He expects the band to really break out in 2022, having added numerous play dates and having produced several music videos by then. The band will be doing mostly covers of songs throughout rock ’n’ roll’s history, but is also composing some of their own material.

“We’re working on a video for one of our original songs next month,” Mr. Garcia said. “It’ll be a legit, cinematic video like you would’ve seen on MTV in the ’80s. That’s one positive tentacle: to express our creativity through the lens of a camera. We intend to do a lot more of that. We’re really excited about it.”

Meanwhile, Jukebox Assassins will spend next year devoting themselves to playing live gigs, and honing the sound and performance quality of their show.

“The real crux will be that we’re going to be as creative as we can, so that ‘Rock ’n’ Roll Love Letter’ is more than just three guys on a stage in a theater with a couple of lights,” Mr. Garcia said. “We want to make it a real show. We want to make it the show we always wanted to see ourselves.” ¦