In the opening scene of “Gimme Shelter,” the usually vivacious Vanessa Hudgens (“High School Musical”) stands in front of a mirror and cuts off her hair. Her character, Apple, has a tattoo on her neck and rings in her lip, nose and eyebrow. She’s undeniably unattractive, leaving no doubt that Ms. Hudgens is eager to leave her Disney good-girl image behind.

Apple also looks unwashed, unhappy and hopeless. At 16, she’s been dealt a bad hand in life and has no idea how to turn it around.

If she plays her cards wrong, she’ll end up just like her mother, June (Rosario Dawson), an emotionally and physically abusive addict who calls her daughter a “useless whore” in the opening moments as Apple runs away. This is good drama; five minutes into the movie, we’re hooked.

Five minutes later, when Apple gets to her estranged father’s (Brendan Fraser) house, we start to dislike her and want it all to end.

Mostly, though, the problem lies with writer/director Ron Krauss, who forgets the truism that audience sympathy evaporates when characters make decisions that defy logic just for the sake of drama. For example: After putting up a stink to stay in her wealthy father’s mansion, Apple runs away the next morning. Why? It’s not made clear, but it doesn’t take much for her father, Tom, to talk her into staying.

Then it’s discovered that Apple is pregnant. Tom and his wife, Joanna (Stephanie Szostak), arrange for an abortion, correctly pointing out that Apple has no way of providing for or taking care of a baby. She runs away again. This time siii Apple apparently thinks life on the street as a pregnant teen with no money is the way to go. The following morning she’s eating out of a dumpster, and if ever there’s a moment in which you knowk you should feel sorry for someone butb don’t, this is it. 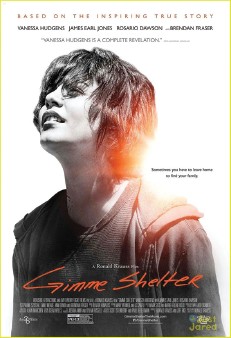 It’s not so much the inexplicable running away or other actions that are the film’s undoing, however; it’s the lack of explanation. Why would Apple leave Tom’s house? What is she afraid of? Why does she want to have the baby? All are good questions that, if answered, would provide depth and clarity to the story. Instead, we’re asked to accept Apple as-is — which is asking a lot when she’s so helpless in helping herself.

Ms. Hudgens is limited as a dramatic actress, but I give her credit for having the temerity to put her wholesome image to rest for good (she was solid as a bad girl last year in “Spring Breakers”). If she keeps pushing herself and evolving as an actress, good things are likely to come.

Ms. Dawson is the real acting standout here, as her scenes are both intensely passionate and totally crazy. You completely understand June’s desperation and perceived betrayal, even though you know she’s a cesspool of a human being.

“Gimmie Shelter” is based on the true story of Kathy DiFiore, played here by Ann Dowd, who in real life opened shelters for pregnant teens and the homeless, sick and elderly. One wonders how much better a movie about her journey could have been presented.

It will be interpreted as a pro-life drama that invokes sympathy for pregnant teens. It does not, however, engender much sympathy for its main character, which is a fatal flaw. ¦