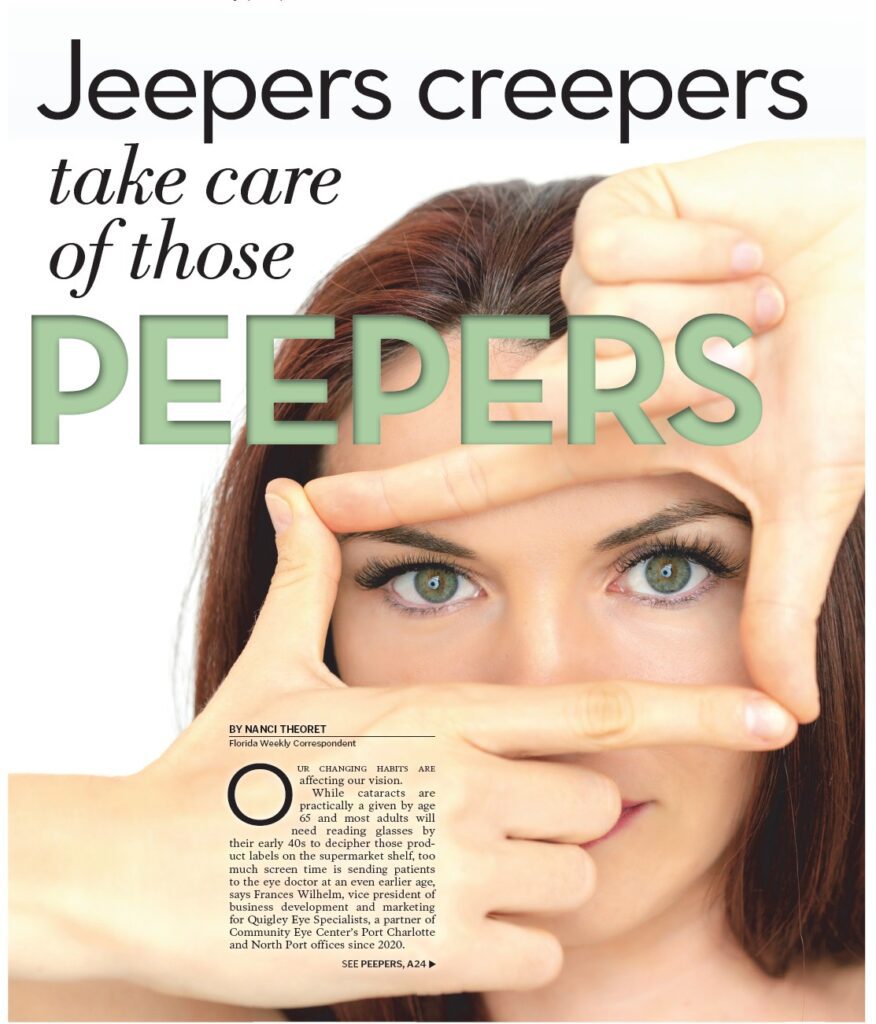 OUR CHANGING HABITS ARE affecting our vision. While cataracts are practically a given by age 65 and most adults will need reading glasses by their early 40s to decipher those product labels on the supermarket shelf, too much screen time is sending patients to the eye doctor at an even earlier age, says Frances Wilhelm, vice president of business development and marketing for Quigley Eye Specialists, a partner of Community Eye Center’s Port Charlotte and North Port offices since 2020.

“Not only should you limit your screen time, but remember to blink,” she says. “People are getting so much more screen time on computers, TVs and phones, the pressure of their blink is much, much less.”

Eyes focused on a screen don’t get the moisturizing and protein-rich benefits of a natural blink, Ms. Wilhelm explains, and that can accelerate dry eye and create severe conditions and pain in the eye.

Florida’s abundant sunshine also comes with its risks. Exposure to ultraviolet rays, which the American Academy of Ophthalmology says can cause eye growths as early as the teens and 20s (often associated with surfers and anglers) and snow blindness from reflections off water and sand, can also lead to early cataracts and future forms of eye cancers. 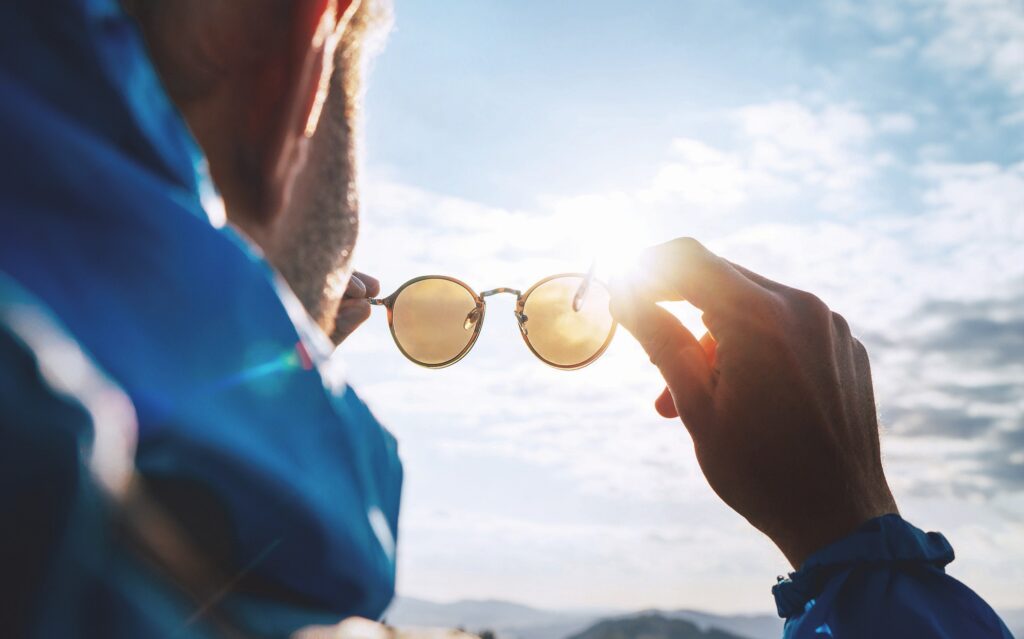 Exposure to ultraviolet rays can cause eye growths as early as the teens and 20s. Eyewear should be screened for UV protection. COURTESY PHOTOS

UV-protective eyewear “is 100 percent effective,” Ms. Wilhelm says. “It can be fashionable but needs to be screened for UV protection.”

Frequent eye exams, starting with newborns, are key to early detection and prevention at all ages. When not detected and treated, conditions such as lazy eye can affect learning, advancements, and certain milestone as well as balance and how a child interprets their environment, says Ms. Wilhelm.

The AAO recommends eye examinations for newborns, a second screening between 6 and 12 months, and a photo screening test between 12 and 36 months to assess eye development and early detection of amblyopia, aka lazy eye, and other conditions. Vision and eye alignment should also be checked between 3 and 5 years. For older children, schools typically provide annual visual screenings. 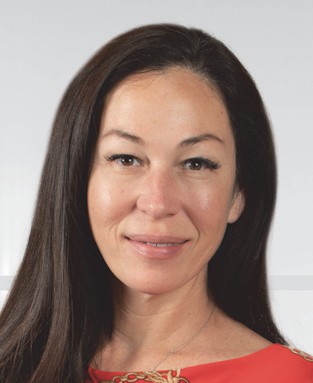 Adults with diabetes, high blood pressure, or a family history of eye disease should schedule an appointment as soon as possible, the AAO says. Adults with healthy eyes and good vision should have a baseline exam in their 20s and two in their 30s. A complete eye exam should be performed at 40, an age when night vision tends to get blurry and reading becomes an effort. The doctor will determine then how often a patient should return. Adults 65 can expect annual or biannual exams to check for cataracts, age-related macular degeneration, glaucoma, and other eye diseases associated with aging.

Visual impairment affects 12 million Americans 40 and older, has an economic impact of $145 billion, takes a toll on quality of life, and is one of the top 10 disabilities among adults 18 and older, the Centers for Disease Control and Prevention reported in 2020. Diabetes and other chronic disease epidemics plus a rapidly aging population are projected to more than double the number of adults with uncorrectable vision impairment by 2050, from 4.2 million in 2012 to 8.96 million. 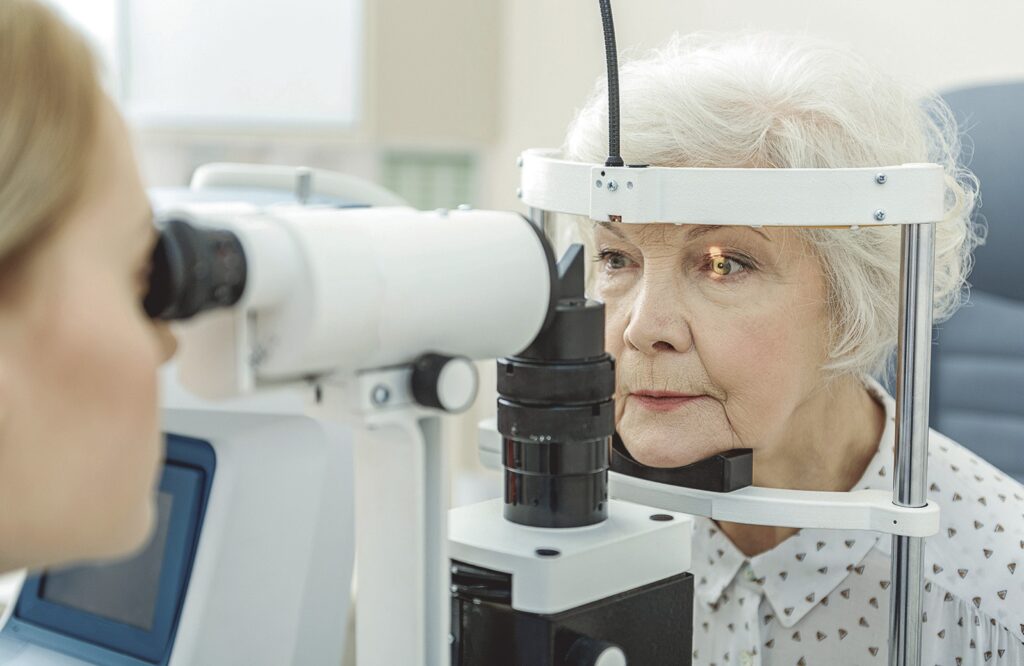 Adults 65 should have annual or biannual exams to check for cataracts, age-related macular degeneration, glaucoma, and other eye diseases associated with aging.

The agency also noted only half of the 93 million adults at a high risk of serious vision loss saw an eye doctor in the past year and that more than 50 percent said lack of awareness and unknown costs prevented them from making an eye appointment.

“Cost should never ever be a reason not to see a doctor,” says Ms. Wilhelm. “We offer free cataract screenings and community screenings.”

Poor eye vision is also a leading cause of injury, even death, from falls for the elderly.

“One in three adults 65 and older will fall in a year,” says Ms. Wilhelm. “Vision impairments double that risk, which makes it even more important for older adults to get their eyes examined. As humans, we acclimate and as our vision changes, we also get acclimated. It’s gradual, so we often don’t notice it happening.”

Technology plays an increasingly important role in evaluating and improving eye health. Most ophthalmologists and optometrists have replaced the dreaded puff of air test with more reliable, advanced equipment to measure eye pressure and detect glaucoma.

But still, “A lot of patients have a great doctor who is using antiquated tools,” says Ms. Wilhelm. “Technology really matters. We pride ourselves on seeking the most advanced state-of-the-art technology to diagnosis and treat most eye conditions.”

New treatments, eye vitamins, and evolving surgical procedures continue to enhance eye health. Advances in interocular lenses, or IOLs, which replace the natural eye lens in cataract surgery, are light years ahead of those from just a decade ago, she says. High-definition, multifocal IOLs extend depth of focus, enhance color richness, improve intermediate and distance vision, and last a lifetime.