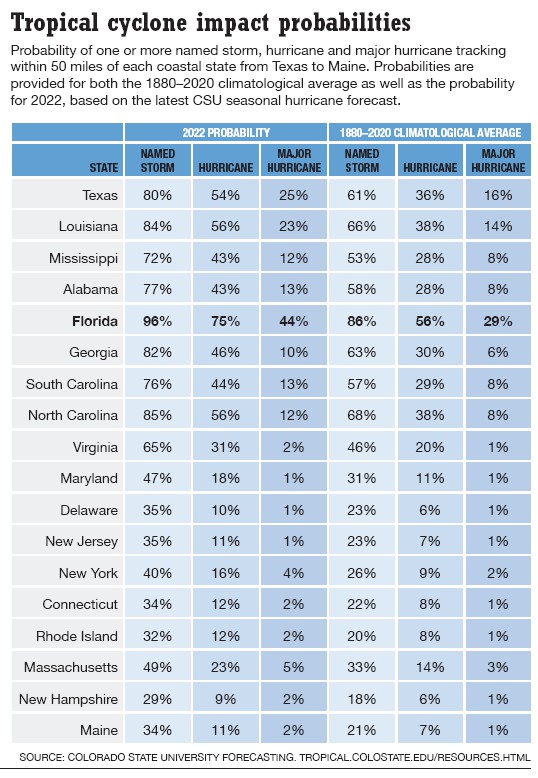 Time to trim the trees, remove the brush, batten down projectiles, get supplies ready and learn the surge potential and evacuation instructions for your home.

A plus, though: Through June 10, storm-preparedness supplies are tax-free in Florida.

The National Oceanic and Atmospheric Administration is predicting 14 to 21 named storms during the season that runs to Nov. 30, six to 10 hurricanes and three to six major hurricanes.

“Although NOAA scientists don’t expect this season to be as busy as last year, it only takes one storm to devastate a community,” said Ben Friedman, acting NOAA administrator. “The forecasters at the National Hurricane Center are well-prepared with significant upgrades to our computer models, emerging observation techniques, and the expertise to deliver the life-saving forecasts that we all depend on during this, and every, hurricane season.”

The CSU team bases its forecasts on a statistical model, as well as three models that use a combination of statistical information and model output from the European Centre for Medium-Range Weather Forecasts, the UK Met Office and the Japan Meteorological Agency, respectively.

So far, the 2022 hurricane season is exhibiting characteristics similar to 1996, 2000, 2001, 2008, 2012 and 2021. “Our analog seasons generally exhibited near- to somewhat above-normal Atlantic hurricane activity,” said Phil Klotzbach, research scientist in the CSU Department of Atmospheric Science and lead author of the report.

El Niño Southern Oscillation conditions are currently in the neutral phase, with the possibility of the return of La Niña later in the hurricane season. “ENSO-neutral and La Niña support the conditions associated with the ongoing high-activity era,” said Matthew Rosencrans, NOAA lead seasonal hurricane forecaster. “Predicted warmer-than-average sea surface temperatures in the tropical Atlantic Ocean and Caribbean Sea, weaker tropical Atlantic trade winds, and an enhanced west African monsoon will likely be factors in this year’s overall activity.” Scientists at NOAA also continue to study how climate change is impacting the strength and frequency of tropical cyclones.

Florida’s disaster-preparedness tax holiday continues through June 10 and, for the first time, shoppers will be able to avoid paying sales taxes on numerous types of pet supplies.

The overall tax holiday has become a regular tax break for Floridians, similar to a back-to-school tax holiday held around the start of the school year.

Pet supplies aren’t the only new items included this year. Lawmakers added smoke detectors, fire extinguishers and carbon-monoxide detectors that cost $70 or less amid calls for residents to safely use generators. Also, people can avoid paying sales taxes on generators that cost $1,000 or less.

“We have now had more deaths over the last several years from generator carbon-monoxide poisoning than we have from storm surge itself,” Florida Division of Emergency Management Director Kevin Guthrie said.

Florida Retail Federation President Scott Shalley encouraged people to take advantage of the discount period, as inflation is at a four-decade high and experts predict an active hurricane season.

Other discounted items this year include tarpaulins, waterproof sheeting and tie-down kits that sell for $100 or less; coolers and portable power banks that sell for $60 or less; portable lights that cost $40 or less; reusable ice packs that cost $20 or less; and gas tanks, portable radios, two-way radios, weather band radios and packs of AA-cell, AAA-cell, C-cell, D-cell, 6-volt, or 9-volt batteries that cost $50 or less.

— News Service of Florida contributed to this report.