Halloween: The price we pay for fear 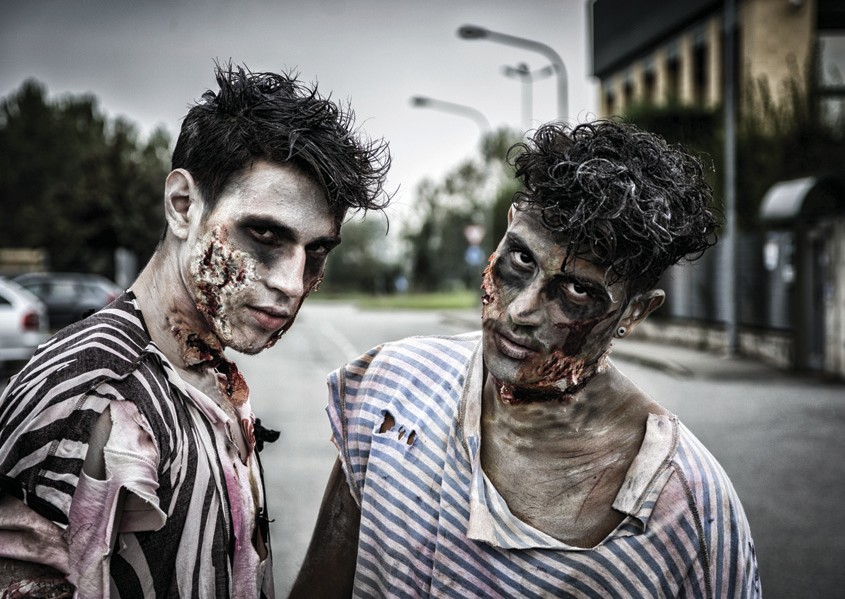 Halloween parties, costumes and candy pump up about $9.1 billion in spending every year. COURTESY PHOTO

You’re traveling through another dimension, a dimension not only of sight and sound, but of mind. A journey into a wondrous land whose boundaries defy logic … a nation whose specific phobias afflict 19 million adults, or 8.7 percent of the U.S. population — leading to copious expenditures on mental health care — yet who spends in the billions of dollars to, essentially, scare themselves silly.

Yes, that number is billions. And this is not The Twilight Zone, but modern American Halloween.

According to the National Retail Federation, with more people celebrating, Americans will splurge on costumes, candy and pumpkins for a record $9.1 billion in Halloween spending this year, according to the annual survey released today by the National Retail Federation and Prosper Insights & Analytics. The figure is up 8.3 percent from last year’s previous record of $8.4 billion. 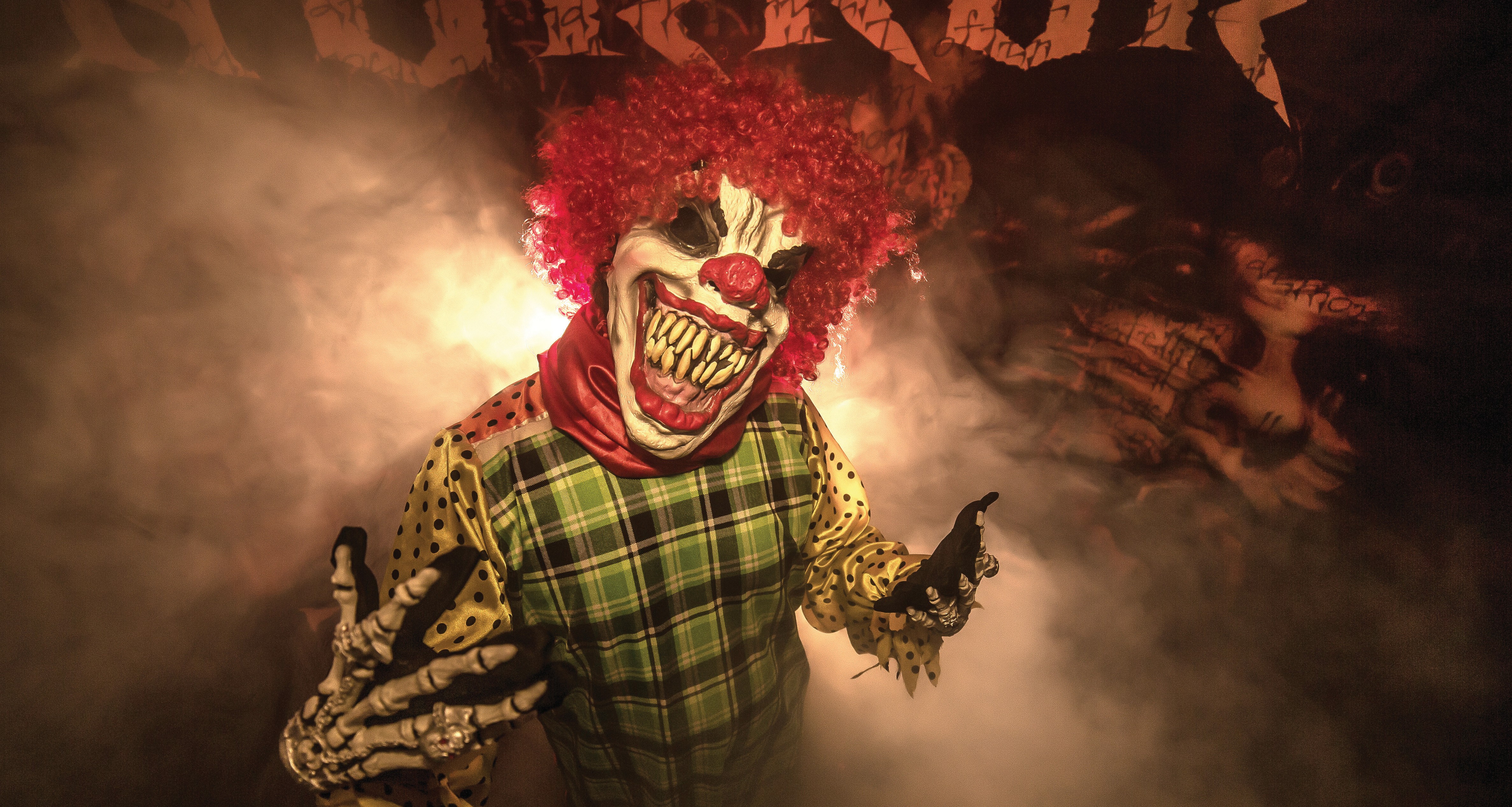 “Americans are planning to spend more than ever as they gear up for Halloween,” said NRF President and CEO Matthew Shay. “Retailers are helping customers celebrate in style with a huge selection of costumes, candy and decorations to cater to ghosts and goblins of all ages.”

That’s quite a lot of contemporary cash for a holiday whose foundations are steeped in superstition.

According to the National Endowment for the Humanities, Halloween’s origins are found in the ancient Celtic festival known as Samhain (pronounced SOW-in). The eve of Oct. 31 is significant because it ushered in the Celtic New Year on Nov. 1. During this time period, the Celts believed that the ordinarily strict boundaries between the worlds of the living and the dead became … unsettled. On the eve of Samhain, the veil between the two realms was the most transparent, allowing the spirits of those who have died to return to visit earth.

When the Roman Empire conquered the Celts, it adopted the holiday, as did the burgeoning Christian church. And look how it has permeated our current society. Why, even the Big Cypress Seminole Reservation — whose culture couldn’t be further from the Celts — offers a “Swamp of Horrors” featuring “a bloody chainsaw slaughter house, a gator graveyard (where more than gators are buried) and a howling collection of Everglades zombie animals” to celebrate Halloween.

Many of the traditions associated with the contemporary American celebration of Halloween —dressing up in costume, holding parades, playing scary pranks and tricks on one another, bobbing for apples and lighting bonfires — come directly from the Celtic Samhain festivals.

The popular custom of dressing up on Halloween, which will account for the third-highest category of Halloween expenditures, borrows from the Celtic belief that the ghosts of the departed (along with the fairy folk, of course) would be roaming the fields and roads near their homes on this night. Fearful of encountering these otherworldly beings from the spirit realm, they began to wear masks and costumes to and from their celebrations in order to fool the spirits into believing they, too, were not of this world.

No wonder Halloween is associated with spooks and scares and the spirit world. But why do we engage in celebrating such dark entities? What’s the appeal?

“The main thing at play is the adrenaline rush that you get from being scared,” said Dr. Nick Joyce, who works at the Counseling Center at the University of South Florida. “It’s really no different than the adrenaline rush someone gets when they jump out of a plane and skydive. Our bodies are physiologically wired with this fight-or-flight response, and when something is a threat or scary, and there’s a risk involved, our bodies get that adrenaline pumped up. We feel energetic, powerful, things of that nature. It’s what people are chasing when they enjoy that feeling.”

According to the article “Why We Love to Be Scared” in the October 2015 issue of Psychology Today, “Usually when we’re scared it IS a bad thing, it’s our bodies well developed threat response system letting us know something is not quite right, and preparing us to run or fight. This sophisticated system triggers a chemical cascade meant to help us survive: adrenaline, endorphins, dopamine, serotonin, oxytocin among others flood our bodies and brains during (and for a while after) a scary situation. But this response shares a lot with other high arousal responses, like when we’re happy, excited, and surprised. The context is what is important when it comes to whether we put a positive or negative spin on the experience. Being scared lost in the woods alone with no help in sight—bad; being scared lost in a haunted house with your friends, with professionals no more than twenty feet away ready to whisk you out of danger— good!”

“Some people like being scared; some people don’t,” said Dr. Joyce, indicating that he falls into the latter category. “Humans are sort of geared toward avoiding things that they find fearful. But there’s a personality construct called sensation seeking. Some people really like the risk, they like extreme sports.”

He believes a person’s reaction to frightful stimuli have much to do with experience. He noted an experiment in which a baby was given a white rat to play with. The baby did fine — until a loud, disturbing crashing sound was introduced whenever the rat appeared. The baby learned to fear not only the rat, but also anything that was white and furry.

By the way, he insists that people who enjoy scary stuff are not somehow deranged or evil or pathological.

“In the same way that someone enjoys jumping out of an airplane or bungee jumping, they’re just looking for that thrill. A scary movie is just another way to provide that. It only becomes unhealthy, as with anything, when it has an addictive quality.”

Interestingly enough, the same mental process is at work in people who fear horror movies or spiders or dogs as in those who fear more abstract items, such as commitment or intimacy or vulnerability.

According to Dr. Joyce, one of the most effective ways of conquering your fear is to face it.

“It’s called exposure therapy, and it’s a proven clinical psychological construct. If you want to overcome something, you have to face your fear. Some people with OCD are very afraid of germs; they’re always washing their hands. So we expose them by putting their hands in dirt; then we follow with response prevention, where we don’t let them wash their hands. So they’re learning to tolerate the bad feelings they get when there’s dirt on their hands. They can’t avoid it or get rid of it through washing. Someone who’s afraid of a dog, we’ll get them closer to a dog until they can pet the dog. They form a new relationship with the feared object.”

For some people, the scariest thing about Halloween is the massive amounts of sugar introduced to the body through eating candy. But don’t worry — unless you have a predisposed medical condition (such as diabetes), it won’t kill you. Really.

The Los Angeles Times reported that to give yourself an even chance of consuming a lethal amount, you’d need to ingest 13.5 grams of sugar for each pound of your body weight, all at once, according to the American Chemical Society.

The average American adult male would have to ingest nearly 2,640 grams of sugar — about 100-150 or more “fun size” packages of candy, depending on its ingredients and his actual weight — to have equal odds of living or dying.

Now, if all this talk about Halloween gives you the jitters, it’s possible you suffer from Samhainophobia, an actual, diagnosable condition that’s described as an unrelenting escalation of anxiety — even terror — about things related to Halloween.

No worries. As the good doctor recommended, go out and face your fear. ¦