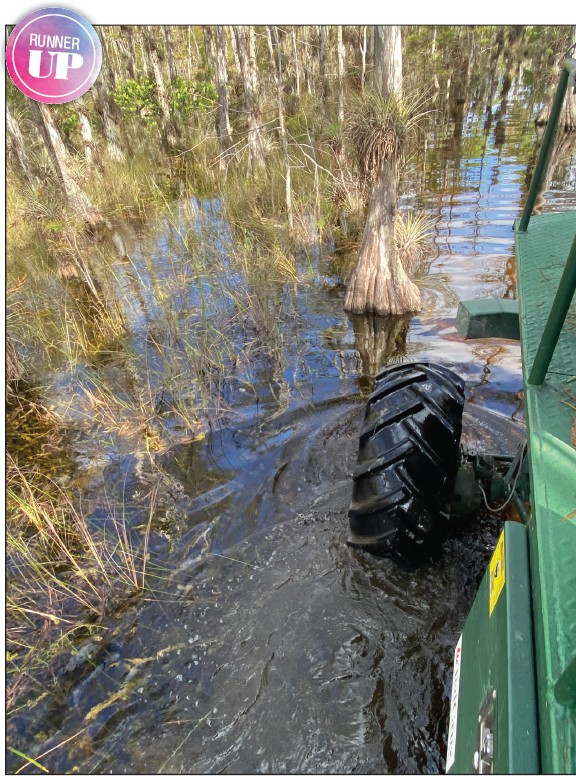 It was still dark when the call came in, dancing my cell phone on the night table. Someone reported that the little one was spotted deep inside the Okeefendokee swamp. Time is of the essence. I had been there several times participating in searches, and I knew it was a dangerous and forbidding place. I arose from my bed charged with excitement to find her, but based on past experience, I knew this could be false hope.

I dressed quickly and coated any bare skin with a cloud of mosquito spray. I smelled like DEET-scented aftershave. I slipped into my tactical vest with all the pockets and slung binoculars over my neck. For breakfast, I shoved a bunch of carbs and calories down to keep me going for hours. A quick sugar high that matched my adrenalin rush.

The sun was peeking past the clouds in the eastern sky, bringing a bitch of a hot day. A day of anticipation and trepidation as she had not been seen for more than 24 hours. A critical time lag.

My swamp buggy was stationed on a ramp trailer beside the garage. I made this thing myself converting a former all-terrain construction man lift into a four-wheel swamp-eating beast. I removed the out-riggers to lighten the load and set a limit switch on the elevation toggle that maxed out at eight feet, way below its previous thirty feet range. I felt confident I would not tip over unless I hit a sudden deep depression like a gator hole lying below the black water. I need to be careful.

The search group assembled at the Route 14 entrance to the swamp and more than a dozen vehicles were already parked along the shell-packed road when I arrived. People were milling about in waders or hip boots. The excessive rains this season have raised the water level throughout the stump-filled morass. Thus, making a perfect playground for deadly water moccasins and gators.

The search leader was speaking to us with hushed tones as if national security was at stake. Most of us felt that our mission was more important than that, and we were getting anxious. We would communicate only by text, not wanting to startle anything out there with voice contact. We each were given a copied section of the map with an X added using a Sharpie. This was the presumed location, and I wondered how such a tiny thing could survive in this harsh environment. But, I was confident that if she were found, it would be by one of us. And I wanted to be that person. With the swamp buggy, I had an advantage.

Of course, fame is fleeting, seldom more than fifteen minutes. Three years ago, I was a successful finder and had a brief interview on local TV. The reporter was more interested in the swamp buggy than me.

I backed it off the trailer, put my cooler and water jug on the platform, and climbed aboard to survey my realm as if I were Alexander about to do great things.

Those on foot split up with half the group on each side of the trail, which narrowed as we got further into the swamp. With my mechanical advantage, I quickly left the search group behind. I heard a sudden shriek and assumed someone had a snake encounter off to my left.

The sun was blistering, and I soaked the inside of my Tilley hat with cool water. Sweat stain darkened my vest. The mosquito hum sounded like traffic noise on the Interstate as they hovered inches from my face and a gator barked from a small hammock as I passed. The air was stagnant and suffocating. I turned to prayer, willing this search to be over. To find her quickly and get out of here before I melted.

Then I heard a noise. I stopped and listened more intently. Then a flash of red ahead of me flitted from one dead limb to another. My heart was pounding. I took the Nikon from my equipment bag and fitted a long lens to scope ahead of me. I had one chance to get the shot of my lifetime. CLICK.

After texting the group with my message, we all went audible, and the congratulations overwhelmed me. I had caught the female ruby-necked indigenous warbler in mid-flight. One of the rarest birds in the western hemisphere. The triumph of my twenty-year bird-watching career. I checked my watch and began to count the fleeting minutes. ¦

Round 7 of the Writing Challenge started in late October, not long after the story of a young woman’s disappearance out West while on a cross-country road trip with her boyfriend had captured the world’s attention. After weeks of searching, her remains were discovered in Wyoming’s Grand Teton National Park. Those of her boyfriend were found later in Myakkahatchee Creek Environmental Park, near where his parents lived in Sarasota County.

Honorable mention winner Edward White says the tragedy was the first thing he thought of when he saw the swamp buggy photo prompt. “But there was no way I was going to use that for my story,” he says. “I wanted to go as far in the opposite direction as I could.”

Even though he’s “not even a little bit of a birder” and has never been on a swamp buggy, let alone stepped foot in a murky swamp, Mr. White turned out a winning story with a surprise ending inspired by the photo.

Here’s the real story behind the picture: Florida Weekly Senior Editor Cindy Pierce snapped it last year while on her first-ever excursion into Big Cypress National Preserve on a buggy hand-built by her Florida Cracker friend Joseph Montgomery.

And here are some bits and pieces from other Writing Challenge entries that used the picture as a starting point:

¦ There was only one thing left for her to do. Ripping off her beautiful hand-sewn antebellum violet dress and bonnet, and saying a prayer to Marjory Stoneman Douglas, she flung herself over the side, landing knee deep in good old Florida mud.

She was not going to let her best friend and hopefully the father of her future children lose this swamp buggy race with her along.

¦ Unbelievably, it is Kemp’s Ridley speaking. The people look at the turtle’s head with surprise. Yes. It’s a little cutie glowing with kindliness and curiosity and peace, and with a longer-than-200-million-year tenancy on Earth.

The crowd returns with groans and shouts.

“If you are so smart, and speak English, why have you kept silence so long?”

“Oh! We speak Human only when we are in trouble. When people and nature are in full harmony, we’ll dance.”

¦ What a beautiful day for a horrible trip.

¦ In about twenty minutes a large green balloon flew overhead and lowered ten body harnesses evenly spaced from the basket above. Some suggested drawing straws, that girls go first, that they be selected by weight, while a few advocated the old adage “survival of the fittest!”

¦ Water splashed up and soaked their legs, but that was OK. Nothing really mattered anymore. That’s why she came on this tour. She heard the Big Cypress Swamp could restore the soul, and this was her last chance.

¦ Frank held the brown leather briefcase firmly to his chest with arms crossed. There was no way he would allow it to fly off into the swamp due to some sudden jolt … He longed for the peace of a simple dirt road. He wondered how Carl could live in this place. His collared sport shirt and Rolex screamed he belonged in another world. He just wanted to get this over with.

¦ His wish was to be buried in the Everglades, as was the custom among his friends, the fishing boat captains and native sons long aged and now wizened, with whom he had traded many stories and sagas.