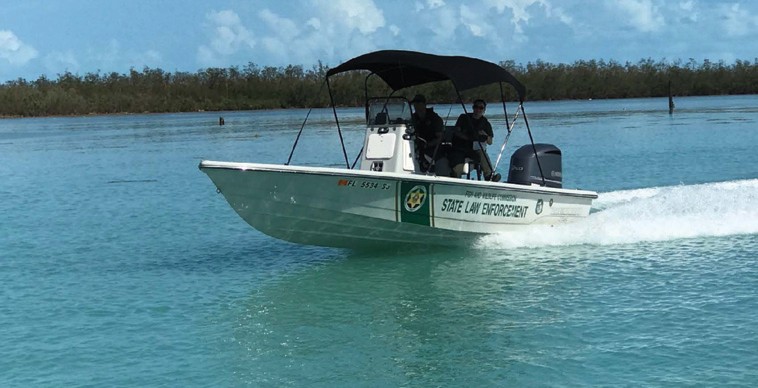 A report on boating accidents in Florida shows that boaters are too often failing to meet basic safety standards.

There were more than 944,000 registered vessels in 2017 in Florida, the most of any state. With so many boats, ample sun and coastlines, Florida is also number one in the nation in boating accidents. There were 766 accidents including 67 deaths across the state in 2017.

Florida boaters also racked up $8.5 million in property damage in 2017.

The counties with the most mishaps also typically had among the most boaters, and were located on the coast in southern Florida with the longest boating seasons. In order in 2017, those were Monroe, Miami-Dade, Broward, Pinellas, Lee, Palm Beach, Okaloosa, Collier, Hillsborough and Duval. In 2016, Charlotte made the top 10, but avoided the list in 2017. 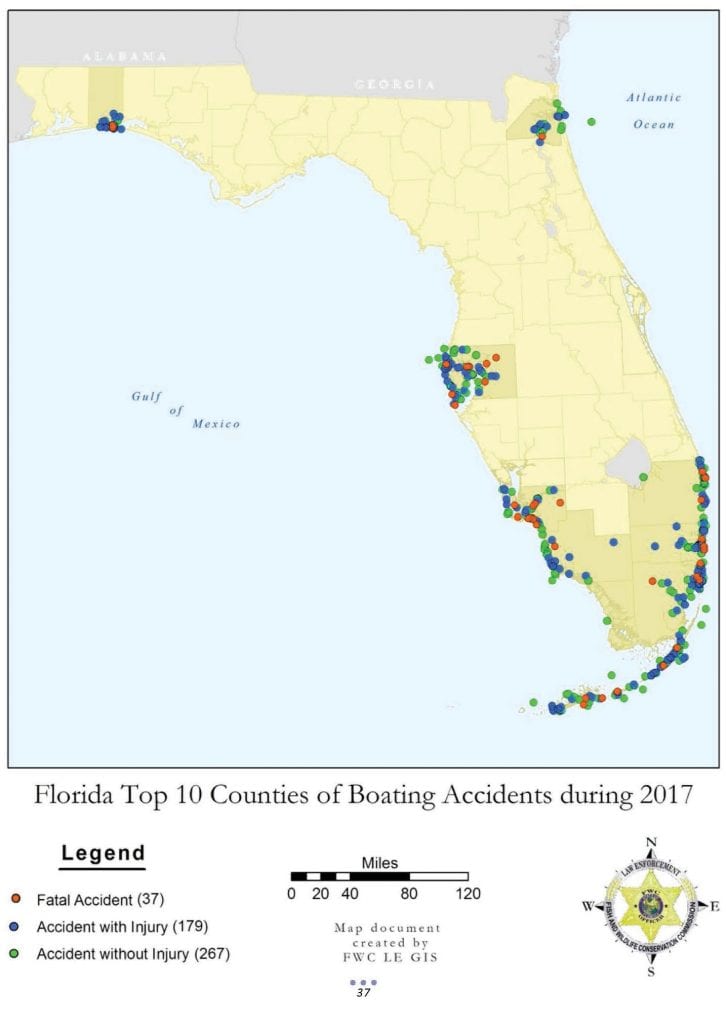 “We had a higher number of accidents, but they were less severe, the injuries weren’t as bad,” said Lt. Seth Wagner, FWC’s assistant boating safety coordinator. “We’re having more accidents where people bump and grind for lack of a better (term).”

In 79 percent of accidents, no one got hurt. But there were still 437 injuries in 2017. Among the most common were lacerations, contusions, broken bones and head injuries.

When you’re operating a boat, like driving a car, keep your eyes on the water, Lt. Wagner said. And life jackets are like seatbelts — anyone getting into a boat should get used to wearing one.

Although boaters sometimes have been distracted by their phones, a GPS system or other technology, Lt. Wagner finds that more often the problem is they were talking with other people or got too relaxed about keeping a lookout. 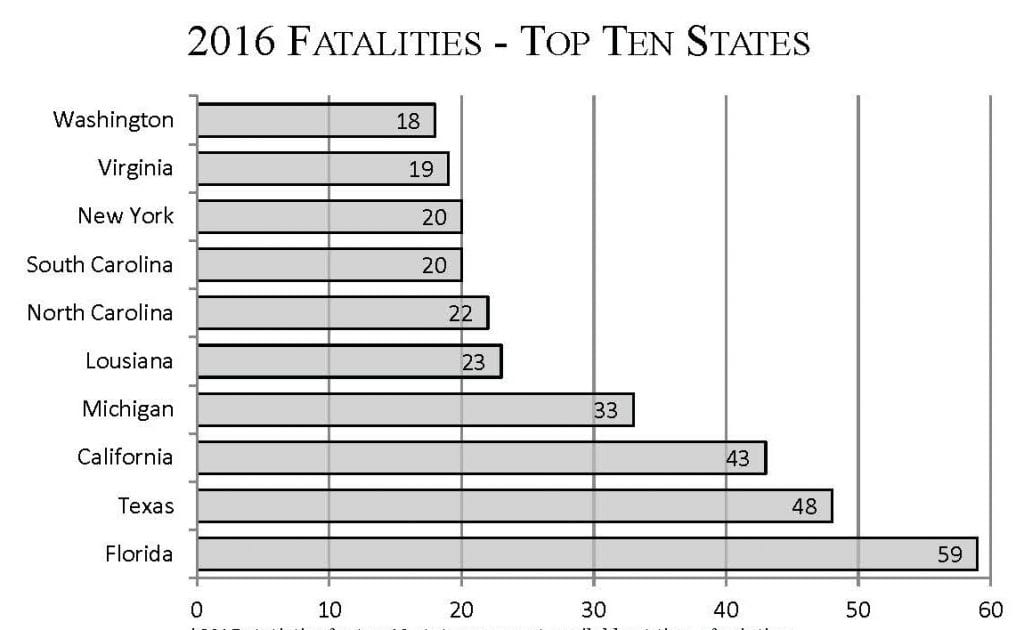 “You get in a relaxed state because you’re out recreating, it’s your day off, whatever, and you may not be identifying what’s in front of you,” he said. “You may not see that post, that boat, that swimmer. You’re multitasking and not really paying attention to what you’re seeing. You’re not staying diligent, and that’s when something happens.”

“It’s a cultural thing,” Lt. Wagner said. “The number of people that are falling overboard and sadly losing their lives are in general my age, 35 and up, 40 some-odd range, where we’re not required to have the boater education.”

Boat operators born on or after January 1, 1988, are required to hold a Florida Boating Safety Education ID Card to operate a boat with 10 or more horses powering it. 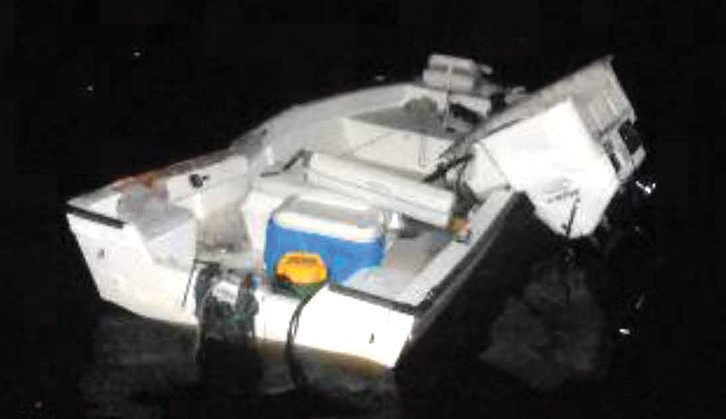 Lt. Wagner points out that any boater education helps, even just going online to brush up on the rules of the water.

A more comprehensive option is the 8- or 12-hour America’s Boating Course offered by United States Power Squadrons, a nationwide network of boat clubs.

The courses are taught by local experienced boaters, said Ron Jones, executive officer of Peace River Sail & Power Squadron. At Peace River they generally cost $45 and $65, respectively, but may vary slightly for different chapters of the group throughout Florida. The courses help people learn the area and all the basic rules and safety guidelines, as well as network with other local boaters.

“The whole goal is to improve boater skills and boater confidence out on the water,” Mr. Jones said. “So the end result is safer boaters.” 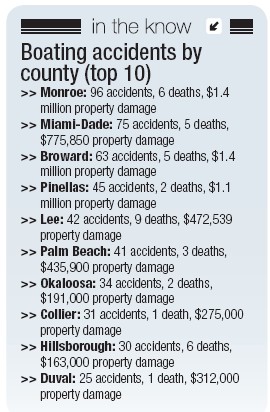 He also pointed out that life jackets are much more comfortable now than when they were kids. There are light, inflatable belt-pack or over-the-shoulder life jackets available, FWC says.

The top location for accidents was a bay or sound, followed by the ocean or gulf, and rivers or creeks. Mishaps also often occurred in crowded marinas.

“It’s people who have larger boats or newer boats and their ego gets in the way and they’re not asking for help when they’re moving around or docking in the marina,” Lt. Wagner said. “There’s nothing wrong with asking somebody to throw you a line when there’s wind or current.”

Besides operator inattention, other top causes of accidents include alcohol and drug use, operator inexperience, careless operation, and speeding. FWC and other law enforcement agencies issued 13,427 citations in 2017, including 388 for alcohol or drugs.

Accidents are listed in the report only if they cost more than $2,000 in property damage or if there is an injury that requires more than first aid. ¦