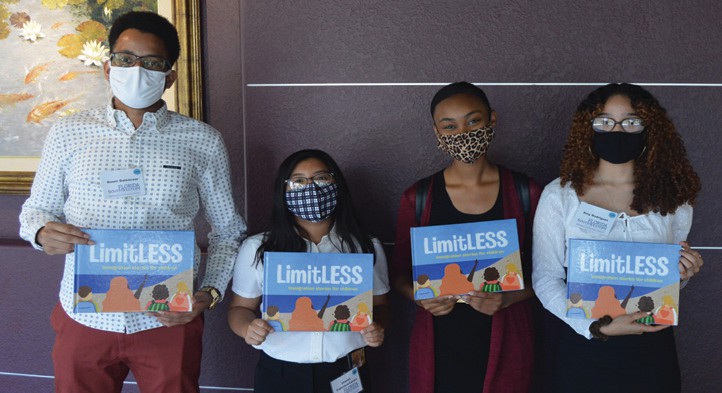 The four, who graduated April 30, were part of FSW’s Honors Scholar Program, which requires students to complete a research project.

“At the time we were deciding on our project topics, the country was such a dark place for immigrants,” Ms. Rodriguez said. “I knew I wanted to focus my project on immigrants and help them feel heard, but I wasn’t sure how.”

Ms. Rodriguez met with FSW Provost and honors program faculty member Dr. Eileen DeLuca who suggested the idea of a children’s book, and Ms. Rodriguez knew what she had to do.

She recruited Ms. Francisco-Castro, Ms. Vernet and Mr. Dalencour to join the project. Together, the students interviewed three immigrants about their experiences coming to the United States. After many long hours of interviews, note-taking and storyboarding, they developed three characters based on the interviewees and co-wrote stories based on their experiences for the book.

“Our participants decided on the name of their character, and we made sure their illustrations reflected each of them,” Ms. Francisco-Castro said. “We also made sure to include a very specific detail that each person shared with us about their life so they could recognize their own story in the character.”

With the help of FSW faculty members Dr. Brandi George, Dr. Jacquelyn Davis and Dr. Wendy Chase, and illustrations by FSW alumna Marty de la Cruz, the students edited and self-published the book through www.Lulu.com. They are now working on distributing “LimitLESS” in schools in areas with a high population of immigrants and getting the book professionally published to reach a wider audience. They also hope to create a series of “LimitLESS” books.

But to these four students “Limit- LESS” wasn’t just about completing their research project. The book also has a personal meaning to all of them. Like the characters in the book, they are each immigrants or children of immigrants, and they understand firsthand the struggles young children face when arriving in a new country. ¦