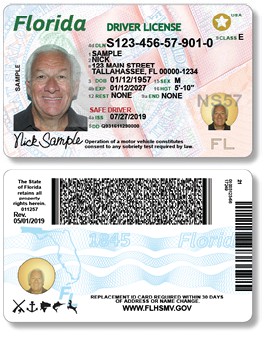 The new driver’s license moves around some of the data on the front and removes the magnetic strip on the back of the card. FLORIDA HIGHWAY SAFETY AND MOTOR VEHICLES

The Florida Department of Highway Safety and Motor Vehicles began issuing a modified Florida driver license and ID card with enhanced security features to customers in May. The improved security features include barcodes instead of a magnetic strip on the back with ultraviolet ink on the front. Raised text on the corner makes it easy to recognize the new license just by touching it. Printed designations make it easy for first responders to tell if the cardholder has a chronic medical condition in the event of an emergency.

These changes represent improvements to Florida’s redesigned driver licenses/ID cards — REAL ID-compliant — that have been in circulation since 2017.

Rollout of the new credentials is being staggered throughout tax collector offices and driver license bureaus in Florida’s 67 counties. Officials say the modified cards will be available at all service centers throughout Florida and online at www.gorenew.com by the end of August.

The modified licenses also meet federal REAL ID requirements, meaning they will still be valid for commercial flights beyond Sept. 30, 2020, the last day Americans age 18 and up will be allowed to board commercial flights without REAL ID-compliant IDs.

Florida drivers are not required to switch to the new license unless theirs is expiring or they have a change in name or address. However, with the upcoming REAL ID air travel changes, it is recommended to take advantage of these new enhanced IDs as soon as they become available.

“The release of this new credential is part of a continued effort to maintain the highest level of security for all Floridians,” said Terry Rhodes, FLHSMV executive director. “In cooperation with law enforcement and our stakeholders, we are committed to enhancing security, preventing fraud and best serving our customers.”

Previously issued driver license and ID cards will still be used until they are replaced or phased out. Any credentials with a magnetic strip and no tactile feature with an issue date after Aug. 31, 2019, will be fraudulent.

To learn more about the modifications, visit flhsmv.gov/newDL, which includes additional resources.