Younger generations, worried about climate change, are poised for action 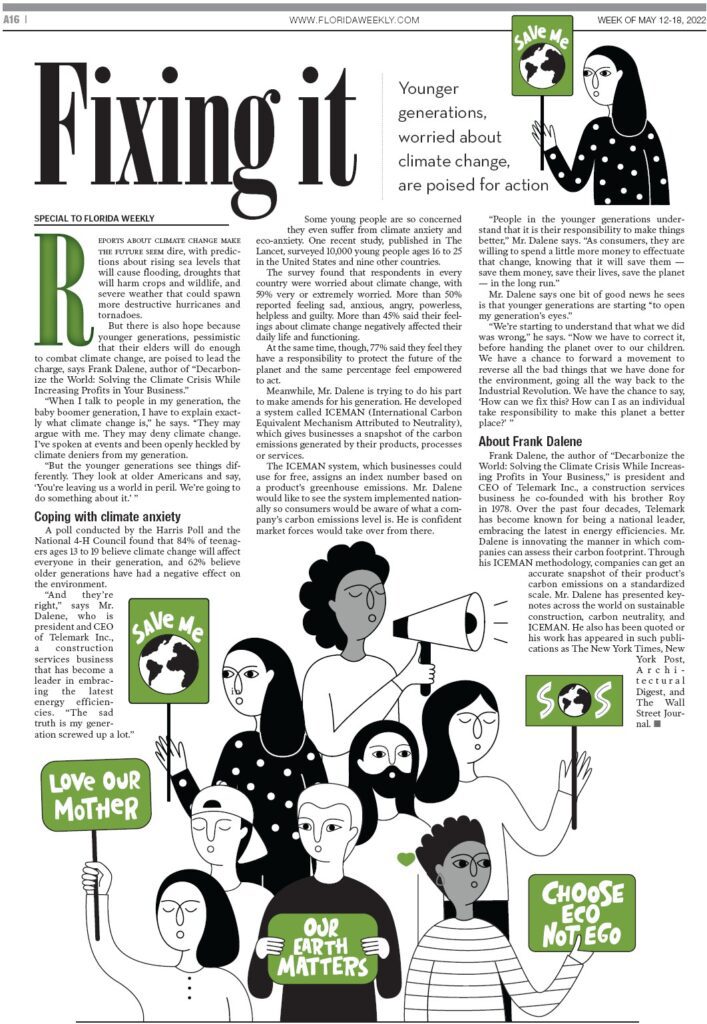 REPORTS ABOUT CLIMATE CHANGE MAKE THE FUTURE SEEM dire, with predictions about rising sea levels that will cause flooding, droughts that will harm crops and wildlife, and severe weather that could spawn more destructive hurricanes and tornadoes.

But there is also hope because younger generations, pessimistic that their elders will do enough to combat climate change, are poised to lead the charge, says Frank Dalene, author of “Decarbonize the World: Solving the Climate Crisis While Increasing Profits in Your Business.”

“But the younger generations see things differently. They look at older Americans and say, ‘You’re leaving us a world in peril. We’re going to do something about it.’ ”

A poll conducted by the Harris Poll and the National 4-H Council found that 84% of teenagers ages 13 to 19 believe climate change will affect everyone in their generation, and 62% believe older generations have had a negative effect on the environment.

“And they’re right,” says Mr. Dalene, who is president and CEO of Telemark Inc., a construction services business that has become a leader in embracing the latest in energy efficiencies. “The sad truth is my generation screwed up a lot.”

Some young people are so concerned they even suffer from climate anxiety and eco-anxiety. One recent study, published in The Lancet, surveyed 10,000 young people ages 16 to 25 in the United States and nine other countries.

The survey found that respondents in every country were worried about climate change, with 59% very or extremely worried. More than 50% reported feeling sad, anxious, angry, powerless, helpless and guilty. More than 45% said their feelings about climate change negatively affected their daily life and functioning.

At the same time, though, 77% said they feel they have a responsibility to protect the future of the planet and the same percentage feel empowered to act.

Meanwhile, Mr. Dalene is trying to do his part to make amends for his generation. He developed a system called ICEMAN (International Carbon Equivalent Mechanism Attributed to Neutrality), which gives businesses a snapshot of the carbon emissions generated by their products, processes or services.

The ICEMAN system, which businesses could use for free, assigns an index number based on a product’s greenhouse emissions. Mr. Dalene would like to see the system implemented nationally so consumers would be aware of what a company’s carbon emissions level is. He is confident market forces would take over from there.

“People in the younger generations understand that it is their responsibility to make things better,” Mr. Dalene says. “As consumers, they are willing to spend a little more money to effectuate that change, knowing that it will save them — save them money, save their lives, save the planet — in the long run.”

Mr. Dalene says one bit of good news he sees is that younger generations are starting “to open my generation’s eyes.”

“We’re starting to understand that what we did was wrong,” he says. “Now we have to correct it, before handing the planet over to our children. We have a chance to forward a movement to reverse all the bad things that we have done for the environment, going all the way back to the Industrial Revolution. We have the chance to say, ‘How can we fix this? How can I as an individual take responsibility to make this planet a better place?’ ”

Frank Dalene, the author of “Decarbonize the World: Solving the Climate Crisis While Increasing Profits in Your Business,” is president and CEO of Telemark Inc., a construction services business he co-founded with his brother Roy in 1978. Over the past four decades, Telemark has become known for being a national leader, embracing the latest in energy efficiencies. Mr. Dalene is innovating the manner in which companies can assess their carbon footprint. Through his ICEMAN methodology, companies can get an accurate snapshot of their product’s carbon emissions on a standardized scale. Mr. Dalene has presented keynotes across the world on sustainable construction, carbon neutrality, and ICEMAN. He also has been quoted or his work has appeared in such publications as The New York Times, New York Post, Architectural Digest, and The Wall Street Journal. ¦