COMMUNITY IN THE KNOW 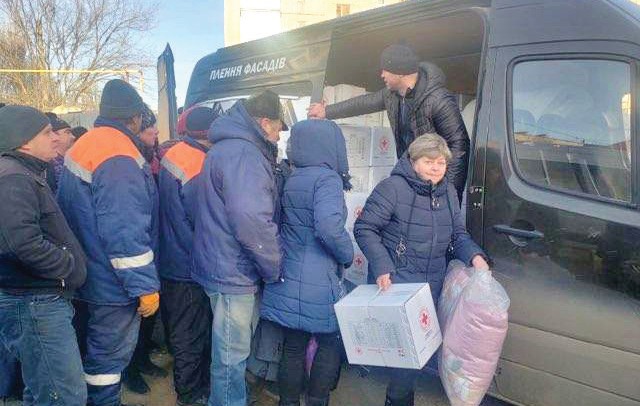 A cargo ship carrying supplies collected by the Fresh Jersey Tomatoes arrived in Chernivtsi, Ukraine, on Sept. 27. The supplies were distributed to refugees on the streets of the city. COURTESY PHOTO

Restoring Oaks Inc. cordially invites the general public to its inaugural gala. Join in for a night of encouragement and empowerment at 7 p.m. Friday, Jan. 27, at the Punta Gorda Woman’s Club, 118 Sullivan St., Punta Gorda. The keynote speaker is Dr. Letitia Browne-James, LMHC, BCC, BC-TMH, who will address how families can fight human trafficking. Dinner will be provided by Carrabba’s. There will also be a silent auction and door prizes. Tickets are $50 for adults, and $35 for children ages 10-17. You can also watch the livestream for $40. RSVP by Monday, Jan. 23. For tickets, see givebutter.com/rogala23.

Help make this night special — bring your friends to fight human trafficking together. If you have any questions, email info@restoringoaks.org or call 941-889-8555.

UF/IFAS Extension Charlotte County will be hosting the class “The Houseplant Renaissance” from 6:30-8 p.m. Tuesday, Jan. 31, at Centennial Park Recreation Center, 1120 Centennial Blvd., Port Charlotte. The guest speaker, Marc Frank, an Extension botanist at UF/IFAS Plant ID and Information Services, will talk about growing and collecting houseplants. Houseplants are back in style and sales are booming. This class will look at what’s driving this renewed interest in houseplants as well as the factors that contribute to success in growing them.

The cost is $10; pre-registration is required at www.eventbrite.com/e/the-houseplant-renaissance- tickets-488150450137.

The Punta Gorda History Center has announced which individuals and organizations that have played significant roles in the city’s history are to be honored at the annual “Southern Supper” on Saturday, Feb. 4.

“We are pleased to recognize these people and organizations who have played a role in making our community what it is today,” said Gene Murtha, board president of the Punta Gorda History Center.

This year’s recipients include:

¦ John Jack Sr. – a multiple-term mayor in the 1920s and ’30s who, among other accomplishments, oversaw the building of Punta Gorda’s City Hall.

¦ W.H. Johnson – a pioneer who was once the city’s biggest landowner and instrumental in the creation of the county.

¦ Robert “Bucky” McQueen – who still resides in Punta Gorda and is well known as an extensive landowner and developer, philanthropist and local historian.

¦ William H. Monson – a former mayor during the World War II years and owner and president of the last-to-survive fish business, the Punta Gorda Fish Company.

Also being recognized this year are:

¦ Sacred Heart Catholic Church, whose forerunner started serving the Catholic community in Punta Gorda as early as 1892, 130 years ago, formally becoming a parish in 1929 with building of its first church.

¦ Smugglers Enterprises, which is celebrating a 30-year history in Punta Gorda as a major business and contributor to the area, with its first restaurant opening in 1993, Harpoon Harry’s.

In keeping with its tradition of honoring a Punta Gordan who died while serving his country, the Punta Gorda History Center will this year honor Sgt. Michael R. Woodliff, who was only 22 when he was killed March 2, 2004, in action while supporting Operation Iraqi Freedom.

This year’s event will be hosted by fourth-generation Punta Gordan Ed Wotitzky.

For more information about the event or to find out about attending, see www.puntagordahistorycenter.com or call 941-916-8800.

After reviewing in-depth analysis and evaluations, FEMA recognizes Special Flood Hazard Areas may be the only feasible option to place temporary housing units in Charlotte, Collier, DeSoto, Hardee, Lee and Sarasota counties. FEMA never places manufactured housing units or travel trailers in a Special Flood Hazard Area as a first option; instead, this is only done after all other practicable options have been exhausted within a community approved for direct housing and with the approval of state and local officials.

FEMA also implements measures to minimize the effect of floods on human health, safety, and welfare when placing a Temporary Housing Unit in a Special Flood Hazard Area. These measures include, but are not limited to:

¦ Sufficiently installing and anchoring all Temporary Housing Units in place.

¦ Evaluating each occupant’s unique needs that may influence the ability to evacuate. (For example, the number of older adults assigned to the temporary housing community, small children and people with disabilities or other access and functional needs are all factors considered when determining candidates for temporary housing in a Special Flood Hazard Area.)

The use of travel trailers and manufactured housing units are among several temporary housing solutions FEMA may provide Hurricane Ian survivors who cannot safely return to their storm-damaged home. Other options include direct lease and multifamily lease and repair. For Direct Lease, FEMA leases existing ready-for-occupancy housing. Multifamily lease and repair is a program in which FEMA enters into lease agreements with owners of multifamily rental properties and makes repairs to existing vacant apartments to provide temporary housing for survivors.

FJTs get word that supplies were received in Ukraine

On March 21, 2022, the Fresh Jersey Tomatoes — a group of women originally from New Jersey who now reside in Charlotte County — organized a humanitarian aid relief effort for the people in Ukraine. North Port has a large Ukrainian population, so donations were being sent to relatives of these residents as well.

A truck left North Port filled with all the donations the FJTs had collected, and headed to Miami. Everything was transferred into a 53-foot container and loaded onto a ship that arrived in Chernivtsi, Ukraine, on Sept. 27.

All of the donations were stored in a local church and distributed among refugees who had to leave their homes in eastern Ukraine. After the beleaguered nation regained control of Kharkiv, the people there were able to take the donations and distribute them on the streets of the city. ¦