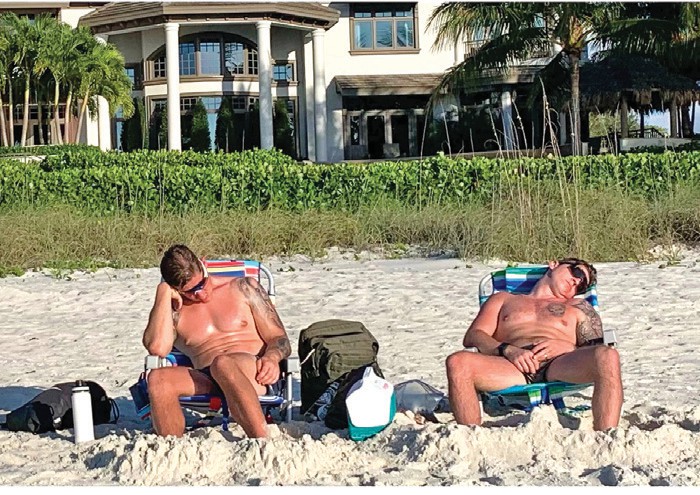 The real story behind the picture: Naples Florida Weekly Editor Eric Strachan caught these party boys seemingly sleeping off a big night as he walked along a Naples beach around noon one day a couple of summers ago. “I couldn’t resist,” the former photo editor for the Naples Daily News says. “They were like bookends, one leaning to the left and one to the right with the cooler in the middle.”

With that assessment of his plight, Larry flexed his biceps, cracked his knuckles, and plopped onto a beach chair in front of the mansion he had called home. Although the former quarterback had worked both sides of the karmic equation, he calculated that in the end, he would have deposited more in the good column than in the “bite-you-in-the-ass” column. His charity work alone had to be worth something.

But today, he wasn’t so sure. Karma had kicked his butt.

Arne nodded agreement as he popped open a couple of Funky Buddha lagers. Raising a thick forearm in a toast, he winked at Larry.

“Here’s to a long life and a merry one. A cold beer — and another one. And a pretty girl,” he paused, “and an honest one.”

Larry flashed the smile that had won — and broken — many a pretty girl’s heart.

Arne wasn’t as well-known as Larry, but then again linemen rarely are. But he held his own notoriety. With chiseled good looks and a brute strength measured in height and heft, he was Larry’s favorite right guard.

They had devised a play in college that followed them to the pros. They called it the quarterfront sneak. Although their playing days were over, one or the other would flash a hand signal prompting a mimicked play where Larry would squeeze through a seam Arne had opened. It could be at the beach, a children’s hospital, or a tuxedoed charity event — especially a tuxedoed event.

“You said crack,” Arne would cackle, playing Butthead to Larry’s Beavis. It was like they had never grown up. But then again, old football players never do — they just pass away.

With their playing days behind them, the jocks had no curfews, weigh-ins, or mandatory reps. The new rhythm blessed them each with extra pounds and slower reactions. Sure, they worked out — that’s what jocks do. To amuse their fans, Arne would slam a 400-pound truck tire with a sledgehammer, while Larry sprinted, cut, and shuffled.

“Are you a football player?” a toned young woman once asked Larry. “Or are you just built like one?” He promptly asked her out.

As right guard, it was Arne’s job to protect the quarterback. Not only did he bankroll a multi-million nest egg covering Larry on the field, but he scored bonuses off the field, as well. Larry bought him a fully-loaded Jeep Wagoneer for paving the rocky roads the playboy created when playing with more than one toned young woman.

“Running interference,” they called it. Because he towered over any scene, Arne could spot trouble before she arrived. Despite his size, Arne was quite graceful. During his pro days, he kept nimble with ballet. After a career-ending injury, he took up ballroom dancing. Nothing flatters — or runs interference — like a well-executed swing bounce.

“May I?” Arne would offer his Super Bowl–ringed hand to an incoming ingénue before she could spot Larry. A spin on the dance floor with the gentle giant would draw everyone’s attention — including Larry’s. He’d then ditch his secondary attraction and cut in on Arne. It was his dogma to play women off each other. It suited him well.

The woman was willowy. Exotic. Drop-dead gorgeous. Her fashion line, dHarma Rta, raked in more than Larry was worth. Its slinky lines defied the common concept of dharma. There was nothing virtuous in its translucent saris, jamas, and kurtas. She preferred the Buddhist interpretation, that of phenomena.

The one-name icon knocked the has-been off his game, and to everyone’s astonishment, they got married. The ceremony, with the bride adorned in dHarma Rta style, surpassed phenomenality. As did their charmed life, with time split between an Aspen chalet, a Manhattan condo, and the Vanderbilt Beach house.

Larry, however, slipped one night when Karma arrived at a gala and Arne missed a block. Slower reaction times, you know. She broke through the line and sacked the quarterback. The play ended in divorce.

Evicted, Larry called his wingman. Arne showed up with beach chairs and Funky Buddhas. They crashed in front of the mansion.

“What are you gonna do, man?” Arne handed Larry a lager, then leaned back to catch some rays.

“Don’t know. Karma’s a bitch. And her dharma just ran over my dogma.” He sank his head into his right fist. “Toss me the sunblock, will you, man? I’m burned.” ¦

— Read the 2021 Florida Weekly Writing Challenge first-place story and three honorable mentions in the Dec. 29-30 editions online at www.floridaweekly.com. The fifth through 10th place finishers have been published this year. This week’s offering is the final one before the 2022 challenge begins next week.