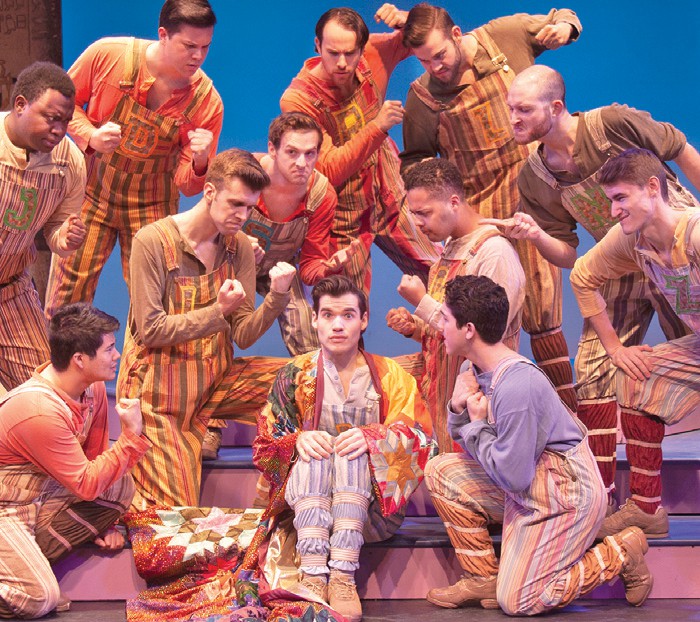 “Thirty years ago, my family and I dreamed of opening our largest dinner theatre ever and set our sights on Southwest Florida,” said owner Will Prather. “The community immediately embraced Broadway Palm and our commitment to terrific entertainment, quality food and friendly service all at an incredible price. I am thrilled to present this exceptional season and look forward to celebrating all that Broadway Palm has accomplished over the past three decades.”

¦ Broadway Palm’s main stage opens on Aug. 26, 2022, and runs through Aug. 12, 2023. Show prices range from $55 to $95 with group and children’s prices available. Performances are Tuesday through Sunday evenings (no Tuesday evening performances May through October) with selected matinees. The main stage productions include: 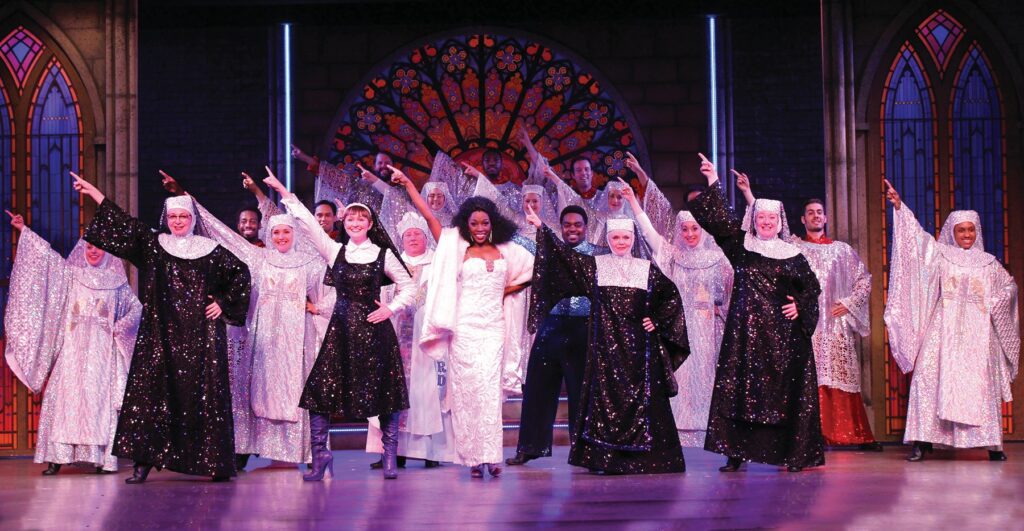 “Broadway Palm Through the Decades”

Relive the last three decades of productions that have made Broadway Palm Florida’s Premier Dinner Theatre. This all-new jukebox-style musical features a talented cast of performers that will sing and dance their way through some of the greatest Broadway Palm songs of all time. You’ll hear numbers from “Me and My Girl,” “42nd Street,” “The King and I,” “Oklahoma,” “The Music Man,” “Miss Saigon,” “CATS” and more.

This stunning musical captures the spirit and tension of a Broadway chorus audition. Exploring the inner lives and bittersweet ambitions of professional Broadway performers, the show features one powerhouse number after another and is a brilliant fusion of song, dance and authentic drama. The memorable score includes “One,” “I Can Do That,” “At the Ballet,” “The Music and the Mirror,” “I Hope I Get It” and more.

This heart-warming Irving Berlin classic takes you back to 1954 when two ex-GIs turned showbiz partners follow a couple of singing sisters to a Vermont inn. When they discover their former commanding officer, who owns the inn, is in jeopardy of losing the property, the foursome decides to put on a show. You’ll hear some of the greatest songs ever written, such as “Happy Holidays,” “Sisters,” “Blue Skies” and the Academy Award-winning “White Christmas.”

“Joseph and the Amazing Technicolor Dreamcoat”

One of the most spectacular and entertaining musicals tells the age-old Bible story of Joseph and his coat of many colors through a kaleidoscope of song and dance. When Jacob gives Joseph a magnificent coat of many colors, his 11 brothers become jealous and sell him into slavery. Because of Joseph’s gift for interpreting dreams, he rises to become the Pharaoh’s advisor. Songs include “Any Dream Will Do,” “Close Every Door and Go” and “Go, Go, Joseph.”

Winner of Best Musical at both the Tony Awards and Olivier Awards, go behind the music of Frankie Valli and The Four Seasons with “Jersey Boys.” Discover the secret of a 40-year friendship as the foursome work their way from the streets of New Jersey to the heights of stardom. The chart-topping hits include “Sherry,” “Big Girls Don’t Cry,” “Can’t Take My Eyes Off You,” “Dawn,” “My Eyes Adored You” and many more.

Follow Deloris, a disco diva, as she witnesses a crime and the cops hide her in the last place anyone would think to look … a convent! Masquerading as a nun, and under the suspicious watch of Mother Superior, Deloris helps her fellow sisters find their voices as she unexpectedly rediscovers her own. She makes new friends and breathes new life into the church, but in the process, blows her cover. This high-spirited musical comedy is a shining tribute to the universal power of friendship.

A lively city boy moves from Chicago to a small farming town where rock ’n’ roll and dancing have been banned. After the culture shock sets in, he tries to shake things up and overturn the extreme ban. In the process, he catches the attention of the lovely preacher’s daughter. The Oscar and Tony-nominated Top 40 score include “Holding Out For A Hero,” “Let’s Hear It For The Boy,” “Almost Paradise” and the title song, “Footloose.”

This Disney classic comes to life on the Broadway Palm stage. Take a dive into a magical kingdom where the beautiful mermaid, Ariel, longs to leave her ocean home to live in the world above. When Ariel falls in love with the human Prince Eric, she makes a bargain with the evil sea witch, but the bargain isn’t what it seems. You’ll see all your favorite characters and hear the irresistible songs including “Under The Sea,” “Kiss The Girl,” “Part Of Your World” and more.

This madcap farce features mistresses, minks, mobsters, mistaken identities, misguided shoppers, suspicious wives, and scantily clad women hiding in cupboards. A London fur salon owner sells his new mistress’ husband a fur coat for an extremely low price in order to win her affection, but things go array when the husband decides to give the coat to his own mistress!

Celebrate the season with this ha, ha, ho holiday revue! Enjoy lots of laughs and traditional holiday favorites you know and love. Join Santa, his elves, a few reindeer and maybe even an Elvis or two! There is something for everyone in this holiday revue that will warm your heart and is guaranteed to get you in the holiday spirit.

It’s sweet. It’s savory. It’s five strangers putting their hearts, reputations, and baking skills on the line to become the crème de la crème of bakers at a county fair. There’s a little mystery, a little romance, some potential cheating, and some back-stabbing — exactly what you expect when the competition is fierce — and the results are deliciously satisfying!

In this hilarious, fast-paced comedy, the inhabitants of one of the smallest trailer parks in Texas are thrown for a loop when they realize the nearby town of Tugaloo is determined to annex them. Watch these colorful residents as they deal with everyday trials and work on various ways to save their little community. They’re guaranteed to double your fun and laughter.

Four high school friends promised to be in each other’s weddings no matter what, not realizing that over 30 years later, this Southern friends-for-life would still be making the walk down the aisle to honor that vow. Hop on this marriage-go-round for a laugh-out-loud journey with these struggling bridesmaids as they navigate the choppy waters of love and matrimony.

This stunning tribute to the music of Garth Brooks features Drew Baloh, who has an uncanny resemblance to the legendary country music icon. Hear some of the greatest music ever produced including “Friends In Low Places,” “The Thunder Rolls,” “The Dance” and more as you go on a country music journey that is unmatched.

“Dwight Icenhower’s Tribute to the King”

Back again by popular demand is one of the best Elvis tributes in the country. Award-winning impersonator Dwight Icenhower has the look, the voice and the hip-swiveling dance moves of the King himself. Hear Elvis favorites such as “Can’t Help Falling In Love,” “Heartbreak Hotel,” “Love Me Tender,” “Hound Dog” and so many more.

Through stories and songs, award-winning performer David Burnham celebrates one of the most electrifying performers and iconic voices of the past five decades — the legendary Tom Jones. Audiences will be wowed by Mr. Burnham’s unique renditions of Tom Jones hits, including “It’s Not Unusual,” “Delilah,” “What’s New Pussycat” and “She’s A Lady.”

“Britain’s Finest” is a Beatles experience unlike any other, as you’ll be in awe of the enthusiasm and energy for which they are recognized and remembered. Hear “I Want To Hold Your Hand,” “Yesterday,” “A Hard Day’s Night,” “With A Little Help From My Friends” and “Yellow Submarine.” CBS LA says it’s “As close to the real deal as you may find in this lifetime.”

“One of These Nights: A Tribute to the Eagles”

“One of These Nights” promises exactly that — an unforgettable night that reproduces the sounds of one of the most successful rock bands of all time, The Eagles. You’ll experience the band’s greatest hits, including “Desperado,” “Lyin’ Eyes,” “Take It Easy,” “Life In The Fast Lane,” “Already Gone,” “Hotel California,” “One Of These Nights” and more.