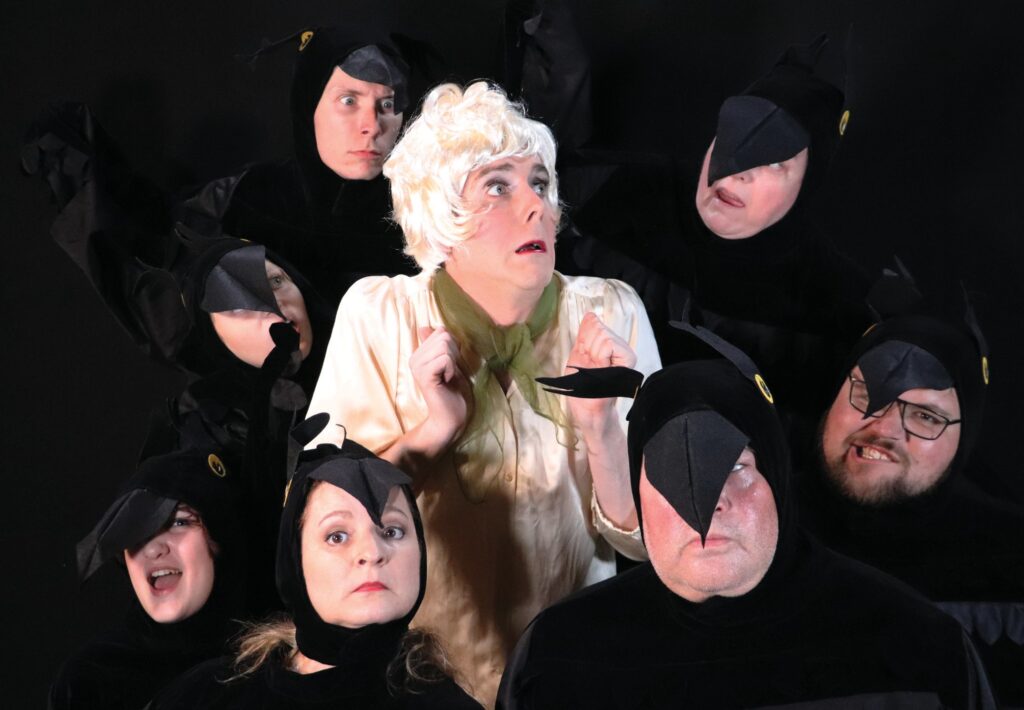 Above:AB Melanie Daniels (Steven Michael Kennedy) is attacked by a murder of crows in “The Birds – A Parody” at The Laboratory Theater of Florida COURTESY PHOTOS

“Why do birds suddenly appear/ Every time you are near?/ Just like me, they long to be/ Close to you.”

“Close to You,” The Carpenters

“That was the darndest thing I’ve ever seen,” declares a character in “The Birds: A Parody,” after a murder of crows attacks a group of children on a picnic.

The same can be said about the show itself, playing at the Laboratory Theater of Florida (through July 2.)

After all, those birds do pause to dance The Macarena before continuing their mutilation and mayhem.

The Lab has a tradition of spoofing classic movies each June, and this year it’s poking fun at Alfred Hitchcock’s 1963 thriller, “The Birds,” in which birds in California begin acting aggressively, gathering together and attacking humans.

Producing artistic director Annette Trossbach, who directs the play, also wrote it, adapting it from the film. (She workshopped it with the cast and creative crew.) 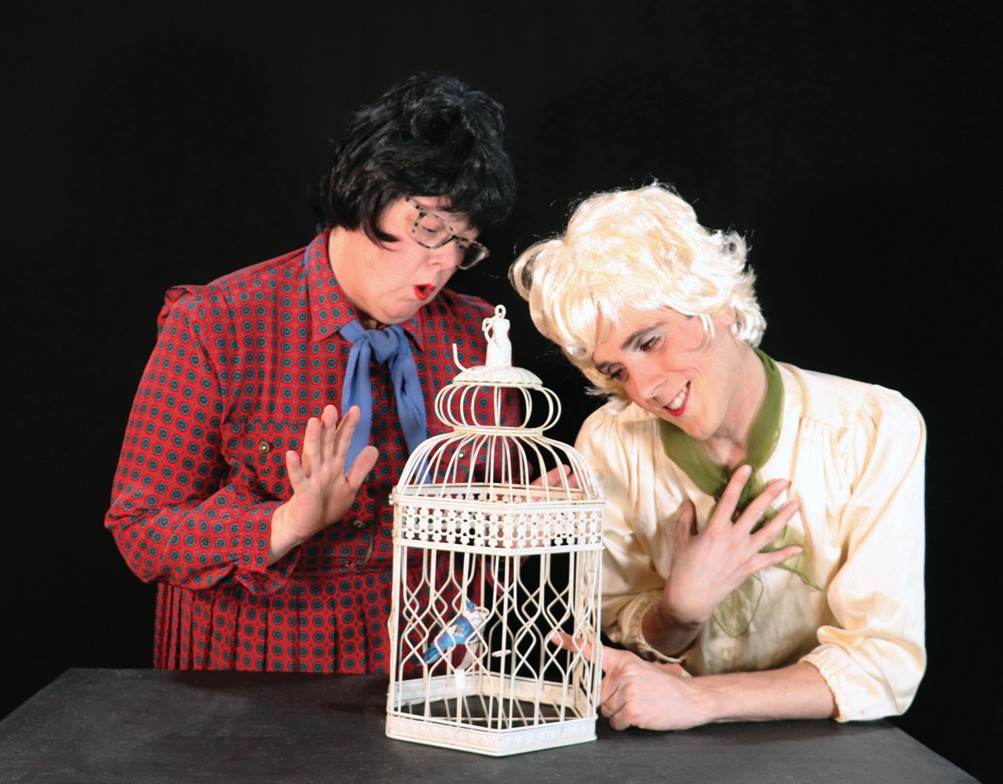 “The Birds” pushes humor to its limits and sometimes falls off the edge of the map. And Lab Theater wouldn’t have it any other way.

There are sight gags and double entendres and funny costumes and strange characters.

And oh yeah, the role of Melanie Daniels (Tippi Hedren in the film), is played by a man.

Steven Michael Kennedy portrays Melanie as the height of haughtiness. The character makes the most of her feminine wiles, combining an overly flirtatious manner with the attitude — and mouth — of a drag queen. She’s a jangle of hormones in high heels, pencil skirt and tight sweater top.

To say she’s well-endowed is putting it mildly; she’s as top-heavy and out-of-proportion as a Barbie doll. In fact, she looks as if she’s trying to smuggle two traffic cones in her bullet bra.

Her absurdly elongated breasts prevent her love interest, Mitch (Steven Coe) from getting close enough to kiss her; they keep him at bay. Mr. Coe is at his dashing best in this parody, tossing off lines with flair in a clipped Mid Atlantic accent. He’s so debonair that in one scene he stands with martini glass in hand, the other in his trouser pocket, a picture of studied casualness. He’s the straight man while craziness and hilarity swirl all around him. 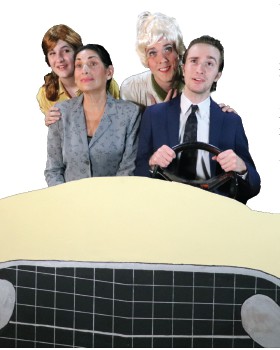 Much of the action takes place in Big Banana Bay, a place filled with strange birds, both feathered and human.

With its action scenes and multiple locales, “The Birds” is a difficult movie to translate to the stage. But Theater is up to the challenge, using minimal sets and filmed projections. There are lots of scene changes, but the music — all from 1959-1963 — make the waiting thoroughly enjoyable. Think: Leslie Gore, Esquival, Sam Cooke, Booker T and the MGs and numerous others.

And Daniel Sabiston acts as a kind of emcee, appearing between scenes in a bird costume. His character is jaded and disgruntled, smoking a cigarette. He firmly believes this role is beneath him, as he attended Juilliard. 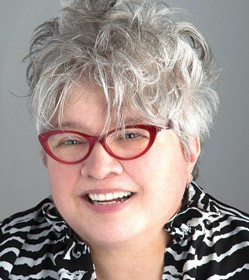 Lab favorite Sue Schaffel also appears in this parody as Mitch’s mother, Lydia. Never a shrinking violet onstage, Ms. Schaffel throws herself whole-heartedly into her role. Her sizzling soliloquy about her late husband’s attributes is a standout comedic moment.

Jo Reed plays Kathy, her 11-year-old daughter: precocious and way too interested in trying out booze and cigarettes.

At times, Ms. Trossbach has a couple of mini-scenes happening simultaneously onstage. For example, there’s Mitch and Lydia’s conversation happening upstage in the kitchen while Melanie talks with Kathy in the living room. I loved how Mitch and Lydia keep exchanging the same dishes to each other to dry throughout. And while Mitch and Melanie are talking in the Average Banana Restaurant, poor fisherman Sebastian Sholes (Mark King) keeps getting served a meal by Helen (Heather Johnson) only to have the food taken away by Dick (Todd Lyman) before he can take a bite. It’s a clever comedic bit that happens stage left, without dialogue. 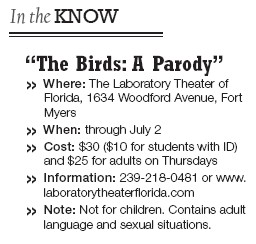 Many of these actors play multiple roles. For example, Mr. Lyman plays a terrific corpse who tries to discretely wiggle and roll off-stage when his scene is over, and Ms. Johnson also plays a school child. Both also play birds.

Adrial McCloud plays a teacher, the stage manager, and a bird. Many of these actors play double- or triple-duty and many of them are wonderfully silly in bird costumes.

Holly B. Zammerilla plays a bird shop keeper, a bird expert and a bird. She had me laughing in her role as the ornithologist self-righteously explaining birds to the rest of the characters.

A couple of child actors round out the cast: Zach Hendra plays a bird and one of its victims (though not at the same time), and Lorelei Davis plays a chicken who struts and pecks like a budding Mick Jagger.

The bird attack scenes feel a little muddy, but all is forgiven when they break out into a dance routine.

And, the audience gets to throw Peeps (the sugared marshmallow confection in the shape of birds) at the cast at three key moments when the birds onstage attack. The venue is going for a world record and plans to throw a minimum of 500 Peeps per performance, so be sure to buy some in the lobby prior to the show and get your pitching arm ready. (Stage crew also throw Peeps from the wings, so the cast really gets pelted.)

This parody is packed full with humor of all kinds. There’s so much happening all at once that some, I’m sure, got past me. But I did love, for example, that when Melanie is driving down to Big Banana Bay, the road projections on the screen behind her make it look as if she’s driving backwards, and a local radio station in the background has the call letters KROW. And when the children are on a picnic, they’re playing Duck Duck Goose before being attacked by birds. And look for homages to “Jaws” and “Raiders of the Lost Ark.”

I’d venture to guess that there are just as many laughs in this parody as there are Peeps thrown each night.

If you have a silly streak and a funny bone, you’ll love “The Birds.”

But you’ll probably never look at a flock of seagulls — nor Hitchcock — in quite the same way again. ¦