They are noisy, loud and obnoxious fun. Depending on your point of view, airboats are exciting and thrilling.

These custom-built swamp boats were specifically designed for shallow waters, mud flats and even snow and ice travel.

According to my research, airboat watercraft has its origins in 1905 in Nova Scotia. The first recorded airboat was called the Ugly Duckling. It was developed by a team led by Alexander Graham Bell, and was used to test engines and propeller configurations. Glenn Curtiss, of the airplane manufacturing fame, was an associate of Mr. Bell’s. Mr. Curtiss is reported to have registered the first airboat in Florida in 1920. The craft had a closed cockpit for the driver and passengers and was called the Curtiss Scooter. By the 1930s, homemade airboats began appearing in the swamps and marshes of Florida and Louisiana. A variety of styles and designs were implemented back then. Eventually, the design was perfected into the airboat of today. 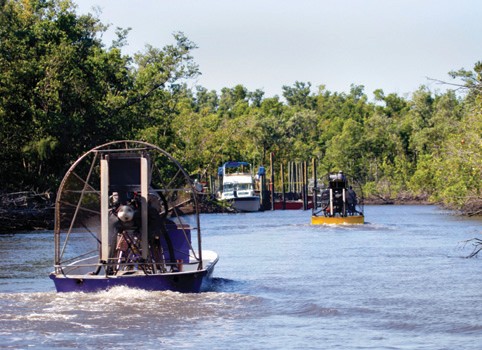 The word airboat had its origins in aviation. It applied to seaplanes and flying boats, as well as amphibian aircraft that could operate from land or sea. These planes had retractable landing gear.

Watercraft airboats have been used commercially for decades. After Hurricane Katrina, many were used for search, rescue and recovery. Because airboats have no underwater drive gear to strike objects and debris, they are ideal for storm and flood rescue operations. And arctic airboats and sleds can travel on snow and ice.

The basic airboat is a simple flat-bottom open hull with rounded chines, the bottom edges of a boat where the sides meet the flat bottom. An airboat has a metal framework with seats mounted to the stringers in the hull. In the back is the engine mount and cage, the fencelike metal framework that protects the propeller from flying objects. Aircrafttype engines are lighter than an automotive types, but either type can drive the boat. Automotive engines are less complex, and there is an availability of parts and gas, so this is the more popular type of power. Typical airboat engines can produce up to 600 horsepower. Specialty racing airboats speeds can reach 130 miles per hour.

The noise generated by airboats doesn’t come from the engine. Most all airboats are required by law to have mufflers. It’s the propeller that creates the sound of an airboat. What you hear is the speed of sound. Small sonic booms are created as the tip of the blade speeds to more than 768 miles per hour.

Propellers have various shapes and designs. The wide blades of wood propellers are great for power and at lower revolutions per minute, give off less noise. Newer carbon fiber and composite props have thin blades and are quieter by design. A prop made of composite material can cost more than $4,000.

There are several places to take an airboat ride and experience the thrill of flying across the backwaters. The Everglades are noted for airboats, as is Lake Okeechobee. Locally, check with your chamber of commerce or other establishment that offers similar nature tours.

Airboating is a fun, exciting way to see the authentic Florida outdoors.

— Capt. Dennis Kirk has been traveling the Peace River since 1979 and is part owner of the Nav- A- Gator, a riverfront restaurant and marina in Lake Suzy, just off Kings Highway. For more information, call 627- 3474.